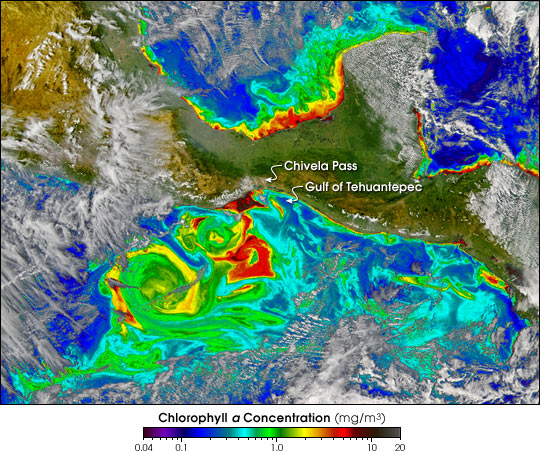 In the Central American winter, gale-force winds from the Gulf of Mexico and Caribbean Sea race through narrow breaks in the Cordillera Mountains, gusting to speeds normally found only in major hurricanes. When these winds blow, the sea follows. The wind mixes the normally warm surface waters with colder, nutrient-rich water that lies beneath. Blooms of algae appear in the path of the winds, fueled by the banquet of nutrients. An entire food chain depends on these episodic wind events.

This satellite image from the Sea-viewing Wide Field-of-View Sensor (SeaWiFS) shows the effect of the Tehuano winds on the ocean’s plant life on December 9, 2003. Winds blowing southwest from the Gulf of Mexico (top center) toward the Gulf of Tehuantepec (bottom left) churned up the water and initiated an algal bloom that is shown in the image in rainbow colors. The colors represent how much plant chlorophyll SeaWiFS detected in the surface water. Highest concentrations are dark red and lowest concentrations are blue.

The meteorological process that causes the winds is relatively simple. In the winter, cold, high-pressure weather systems move southward from North America over the Gulf of Mexico. These high-pressure systems create strong pressure differences between the atmosphere over the Gulf of Mexico and the warmer, moister atmosphere over the Pacific Ocean. Just as a river flows from high elevations to lower elevations, the air in the high-pressure system will flow “downhill” toward lower pressure.

Because Central America’s Cordillera mountains block the flow of wind in many places, it blasts through the passes in Mexico, Nicaragua, and Panama—the mountains are like a thumb over the mouth of a flowing garden hose. Many times, a Tehuano wind is followed by Papagayo and Panama winds a few days later as the high-pressure system moves progressively southward. The wind jets push the warmer surface waters away to the southwest, and cold, deep water replaces it. The effect is so powerful that the sea surface temperature can drop 10 degrees Centigrade in a single day when the wind jets blow over the ocean surface.

Another interesting feature in the image is a band of clouds stretching across the bottom of the image from west to east; these clouds mark the location of the intertropical convergence zone.