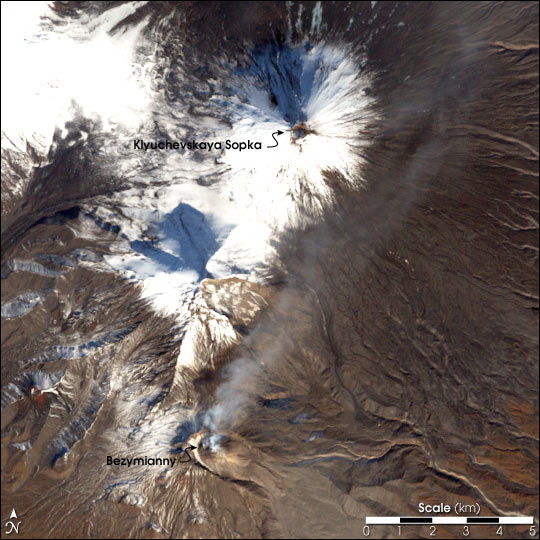 Bezymianny Volcano smokes quietly on September 22, 2000, in this view from the Landsat 7 satellite. Bezymianny began erupting in February 2000, and has been moderately active since. On January 13, 2004, a relatively large eruption sent an ash plume 6 kilometers into the air. This activity continues a trend that began in 1955, when the eastern flank of the volcano collapsed in a catastrophic eruption similar to that of Mount Saint Helens in 1980. The resulting crater has been partially filled by a lava dome (easily seen in the above image) that continues to grow.

Just to the north stands Klyuchevskaya Sopka, the tallest volcano in Eurasia (4,750 meters).

The volcanoes on the Kamchatka Peninsula are some of the most active on Earth. Located on the western edge of the North Pacific, Kamchatka lies along the “Ring of Fire,” a zone of volcanoes and frequent earthquakes on the edges of the Pacific Ocean. In mid-January 2004 at least four volcanoes in the region were erupting: Bezymianny and Klyuchevskaya Sopka as well as Shiveluch and Karymsky.

Image by Robert Simmon, based on data provided by the Global Land Cover Facility, University of Maryland