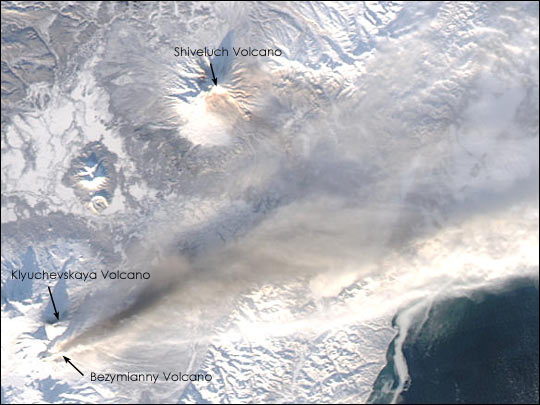 The Bezymianny Volcano on Russia’s Kamchatka Peninsula started to erupt violently on January 13, 2004. According to the Alaska Volcano Observatory, the ash plume reached a height of 3.75 miles (6 kilometers). The plume shows up clearly in this Moderate Resolution Imaging Spectroradiometer (MODIS) image acquired on January 14, 2004, by the Aqua satellite. Bezymianny had been considered extinct before its dramatic eruption in 1955-56. Since then, the volcano has been relatively active, its most recent eruption having ended in January 2003. This eruption, however, was somewhat unexpected. The volcano went from code green, which indicates that the volcano is dormant, to code red, the color assigned to erupting volcanoes. For more information, see the Smithsonian’s Global Volcanism Program.

Three other volcanoes on Kamchatka are currently active. Shiveluch, or Sheveluch, seen in the top of this image, began to erupt on January 11, 2004, according to news reports. Ash still taints the snow around the volcano in this image. Klyuchevskaya (also called Kliuchevskoi), just north of Bezymianny, has also been emitting a faint ash plume. To the south of the area shown in this image, ash darkens the snow around Karymsky, evidence of its recent activity.

The high resolution image provided above is at MODIS’ maximum resolution of 250 meters per pixel. The image is available in additional resolutions.

Klyuchevskaya Sopka, the largest volcano on the Russian peninsula of Kamchatka, and neighboring volcanoes, Shiveluch and Bezymianny, are becoming active again.