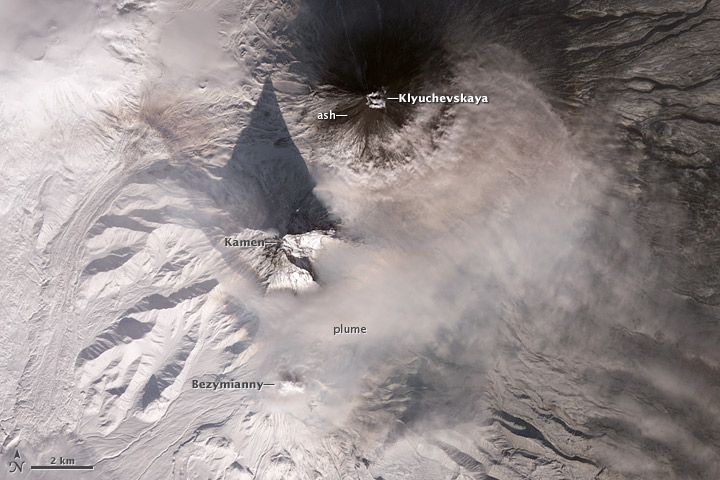 After 15 months of activity, the most recent eruption of Kyluchevskaya Volcano (also spelled Kliuchevskoi) ended on November 4, 2010. According to the Kamchatka Volcanic Eruption Response Team (KVERT), tremors subsided, the persistent hotspot (detected by satellite) at the summit disappeared, and emissions of ash ceased, replaced by fumarolic activity. Meanwhile, steady growth of a lava dome continued at neighboring Bezymianny Volcano.

This false-color satellite image shows the two volcanoes on November 5, 2010. Diminutive steam plumes obscure Klyuchevskaya’s summit crater, while black ash covers most of the upper slopes. Emissions from Bezymianny obscure the volcano and much of the surrounding landscape. Both Klyuchevskaya and Kamen (a dormant volcano) stand far higher than Bezymianny, so the peaks extend above Bezymianny’s plume. Snow covers the ground in the region, and long shadows point almost directly north.

After a respite of less than a month, Klyuchevskaya Volcano resumed erupting in late November 2010.