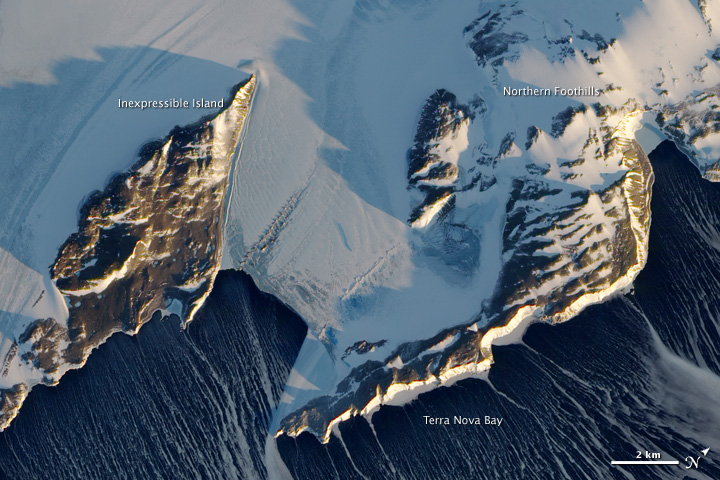 Just days away from the beginning of the Southern Hemisphere’s spring, Antarctica’s Inexpressible Island and the Northern Foothills Mountains were illuminated by a glimmer of sunlight from a low angle when the Advanced Land Imager (ALI) on NASA’s Earth Observing-1 (EO-1) satellite captured this image on September 16, 2009. The seaward slopes of the mountains are gleaming white, and they cast long shadows inland over the Nansen Ice Sheet. Terra Nova Bay appears in shadow.

The scene provides at least two indications of the bay’s persistent and fierce katabatic winds—downslope winds that blow from the interior of the ice sheet toward the coast. One is the windswept ground in the mountainous terrain. In many places, there is a pattern of bare rock and snow drifts that suggests the winds have scoured snow from upwind (inland-facing) slopes and deposited it on the lee sides.

The second sign of the strong winds appears in the open waters of Terra Nova Bay. Parallel white streamers are composed of newly formed sea ice, probably frazil—crystals just millimeters wide—and congealed frazil, called “grease ice” because it resembles an oil slick on the water. The ice is continually pushed out to sea by the strong offshore winds, leaving a pocket of open water, a polynya.

The winds are responsible for making this location an ideal spot for Adélie penguins, which have a colony on Inexpressible Island and at other sites around Terra Nova Bay. Unlike Emperor penguins, which breed on sea ice, Adélie penguins nest on ice-free land, which must be accessible to them via open water and close to their marine food supply. The Adélie penguin’s habitat requirements are so specific that scientists have used fossils from ancient Adélie penguin colonies to re-create the climate and ice conditions in the Ross Sea stretching back 45,000 years.

The scene provides a glimpse of the persistent and fierce downslope winds that blow from the interior of the Antarctic ice sheet toward the coast.

In Terra Nova Bay, off the Scott Coast of Victoria Land, Antarctica, a large pocket of open water persists throughout most of the Southern Hemisphere winter, even while most of the rest of the Antarctic coastline is firmly embraced by the frozen Southern Ocean.