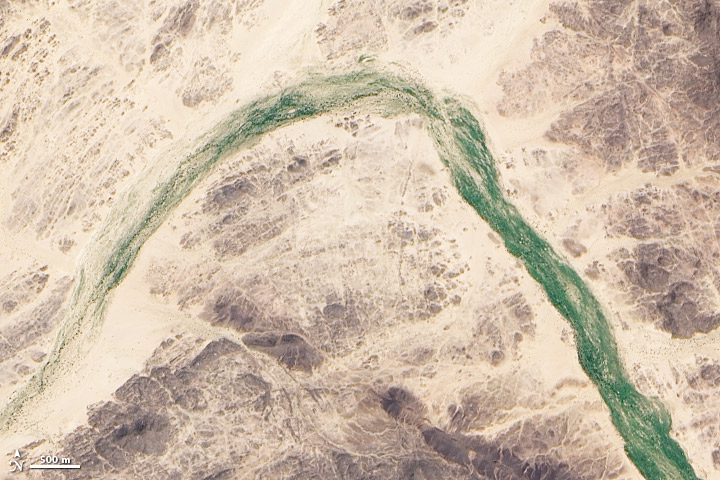 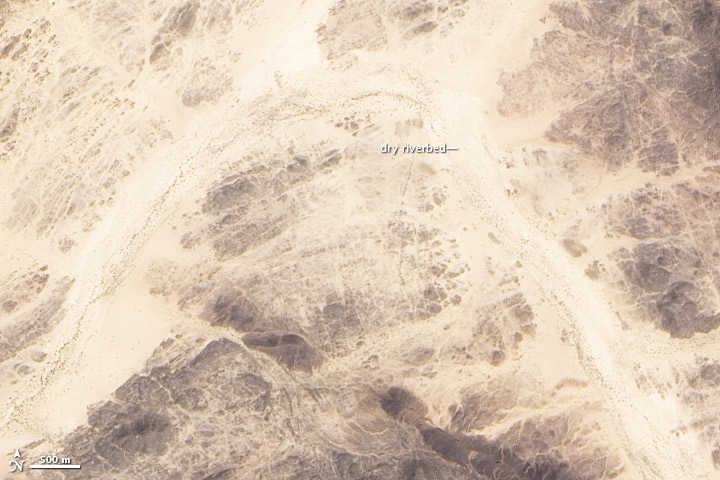 With the majority of its land area lying within the Sahara Desert, dry, dusty Niger is one of the hottest countries on Earth. Only the southernmost regions of the country receive enough reliable precipitation to support agriculture or livestock grazing. In the north, rock outcrops and sand dunes predominate, although sporadic precipitation sometimes allows drought-adapted plants to grow in favorable locations, such as this wadi in northern Niger, not far from the Algerian border.

A wadi is streambed that is dry except following recent rain. The Advanced Land Imager (ALI) on NASA’s Earth Observing-1 (EO-1) satellite captured this pair of images showing how rain can transform a wadi into an oasis for vegetation. The bottom image, acquired on September 18, 2009, shows the wadi in its usual state, with a parched surface varying in color from brown to off-white. The top image, from September 19, 2007, looks dramatically different; freshly sprouted vegetation colors the wadi green. Although the plants are fairly sparse in the west, in the east, they carpet the wadi thickly.

Desert plants have evolved a few strategies for handling their arid habitat. Some store water in fleshy leaves or roots, while others can remain dormant—seemingly dead—for months or even years while waiting for rain. Some Saharan species can sprout within three days of sufficient rainfall and sow their seeds 10 to 15 days later.

These true-color images show a wadi in northern Niger on September 19, 2007, and September 18, 2009. The 2007 shows the wadi populated by plants that have taken advantage of recent precipitation.