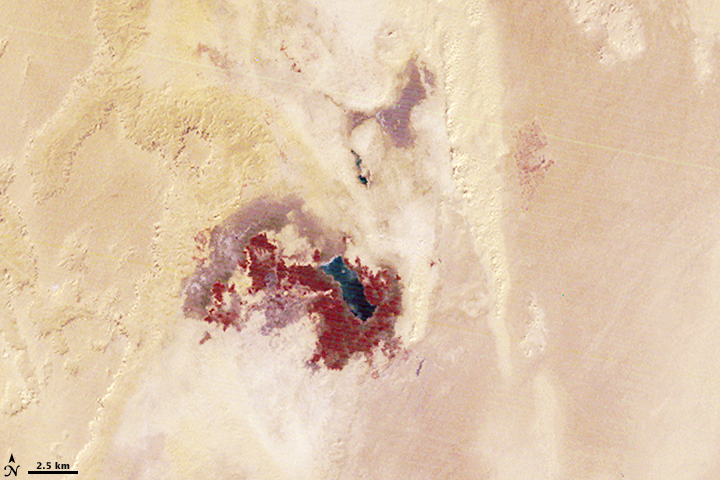 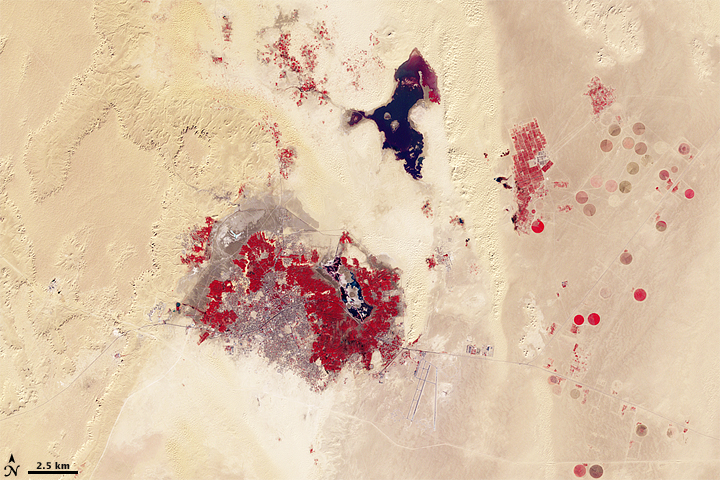 Along its coast, Algeria enjoys a Mediterranean climate with plentiful precipitation and fertile soils. Roughly 96 percent of the country’s population lives in this mountainous region. To the south, precipitation levels drop, and the land gives way to Saharan sands. Just as the rainfall diminishes, so does the number of human inhabitants, with approximately seven people per square kilometer in southern Algeria.

In the arid stretches of southern Algeria lies the Ouargla Oasis. The Multispectral Scanner on NASA’s Landsat-2 satellite captured the top image of the oasis on January 16, 1972, and the Enhanced Thematic Mapper Plus on NASA’s Landsat-7 satellite captured the bottom image on December 20, 2000. In these false-color images, red indicates vegetation, and the brighter the red, the more robust the vegetation. Pale pink and orange tones show the desert landscape of sand and rock outcroppings. The earlier satellite image shows a lush area surrounding the oasis. The later image shows both urbanization near the oasis, and an assortment of irrigated fields in the region.

The Ouargla Oasis receives its water from the underlying North-West Sahara Aquifer, a water-bearing rock layer that stretches under Algeria, Tunisia, and Libya. Inhabitants of the Ouargla Oasis have regularly sunk boreholes into the aquifer to tap its resources for irrigation. Beginning late in the twentieth century, however, the rate of well drilling increased to levels deemed unsustainable by the United Nations Environment Programme. Continued drilling was expected to increase the salt content of the upper layer of the water table, which would ultimately harm the irrigated vegetation.

Irrigation in the Heart of the Sahara

Although it is now the largest desert on Earth, during the last ice age the Sahara was a savannah with a climate similar to that of present-day Kenya and Tanzania. The annual rainfall was much greater than it is now, creating many rivers and lakes that are now hidden under shifting sands or exposed as barren salt flats. Over several hundred thousand years, the rains also filled a series of vast underground aquifers. Modern African nations are now mining this fossil water to support irrigated farming projects.

One example of increasing aridity in Mali appears in Lake Faguibine. Starting in the late 1980s, a drop in precipitation steadily dried the lake. Even though normal rainfall resumed after the year 2000, the lake remained nearly dry.