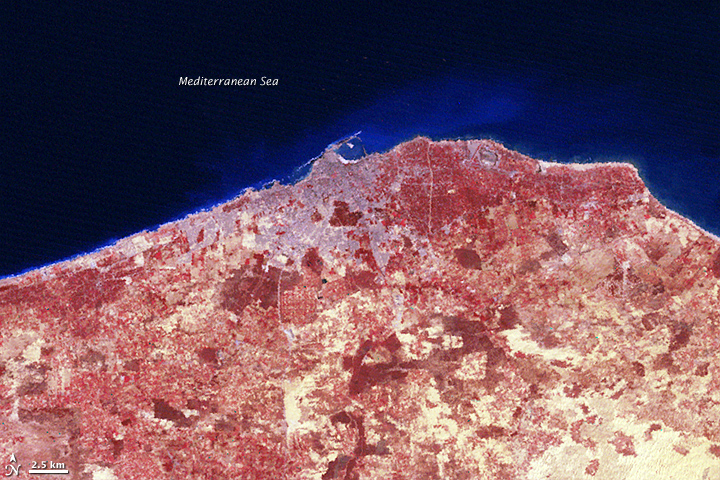 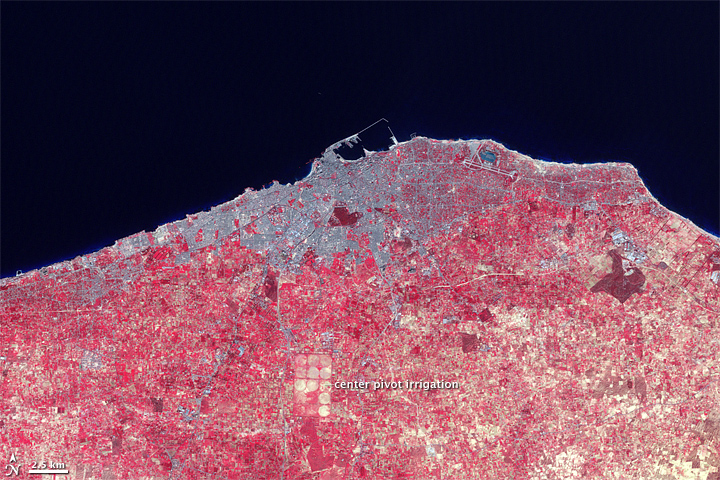 Libya lies along Africa’s Mediterranean coast, and while most of the country consists of rocky plains and sand seas, a narrow band of fertile lowlands stretches across the country’s northern edge. Nearly three-fourths of Libya’s population has squeezed into urban areas—just 1.5 percent of Libya’s land area—on the coast. Among these urban areas is the capital city, Tripoli.

These images show Tripoli’s expansion between 1976 and 2002. The Multispectral Scanner on the Landsat 2 satellite captured the top image on January 29, 1976. The Enhanced Thematic Mapper Plus on NASA’s Landsat 7 satellite captured the bottom image on January 12, 2002. In these false-color images, red indicates vegetation, and the brighter the red, the more intense the vegetation. Blue-gray indicates buildings and/or paved surfaces. Beige indicates bare ground and/or fallow fields. The Mediterranean Sea appears nearly black.

The later image shows an expanded urban area, with a blue-gray network of city streets stretching out both east and west from the city center. In the southwestern part of the city in 2002, urbanization engulfs some areas of previously robust vegetation. The same image, however, shows a large-scale irrigation project—15 fields using center pivot irrigation south of the city. The various stages of vegetation growth in these fields can be discerned from the varying shades of red and beige.

Rainfall in Libya is less than 100 millimeters (4 inches) per year, and the country has sometimes tapped groundwater resources at unsustainable levels. In 1983, Libya established the Great Man-made River, an ongoing engineering operation involving 1,300 wells as much as 500 meters (1,640 feet) deep and 1,300 kilometers (roughly 800 miles) of pipeline. This project began supplying water to Tripoli in 1996, easing demands on the region’s Upper Aquifer. Before the new water supply arrived, water extraction from that aquifer threatened to lower the water table enough to cause saltwater intrusion from the Mediterranean Sea.