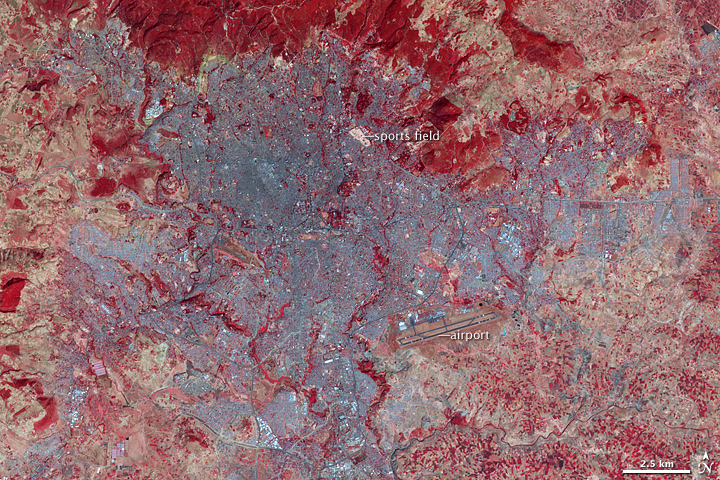 Although it is only the tenth largest country in Africa, Ethiopia is the second most populous country on the continent. Nearly a third of the country’s urban population lives in Adis Abeba (more commonly known as Addis Ababa), in the Ethiopian Highlands. Starting in the mid-1970s, poor agricultural productivity, unemployment, and poverty pushed Ethiopians from the nearby countryside into Adis Abeba, and the city began a period of rapid growth.

Tree-lined waterways meander through the city, evidenced by the blue-black channels lined with robust red. Areas of robust vegetation also appear along the city’s northern fringes, but most of the areas along Adis Abeba’s outskirts consist of sparsely vegetated areas or bare ground. Vegetation is especially sparse in the center of this image, where the blue-gray shades of urbanization intensify.

Even before the major influx of immigrants into Adis Ababa in the mid-1970s, a shortage of suitable housing left many city residents living in slums. Over the years, the need for housing lead to illegal housing developments that eventually encroached on protected forests and reserves around the city’s margins. A report by the United Nations Environment Programme found that, while Ethiopia’s slum population increased between 1990 and 2001, sanitation services improved substantially over the same period.