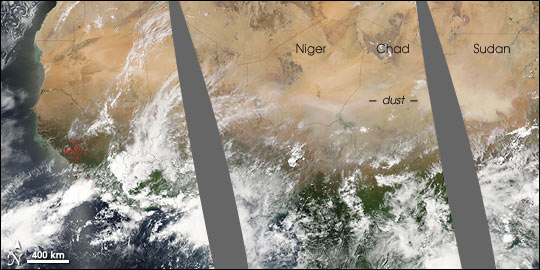 On March 23, 2005, winds were whipping across the sands of the southern Sahara Desert in northern Africa, spreading thick clouds of dust. The thickest plumes of dust are visible in Sudan, Chad and Niger, but dust also reaches southward into Nigeria (south of Niger) and Cameroon (east of Nigeria). On the Atlantic coast, scores of fires (marked in red) are burning in Senegal.

Dust storms are frequent hazards to farmers and herders in the semi-arid lands at the southern margin of the Sahara. The winds can reach speeds up to 100 kilometers per hour, reducing visibility to zero, stripping the paint off cars, and causing sands dunes to move like waves across a sandy sea.

South of the desert proper is a semi-arid region known as the Sahel, which is continually under threat of desertification, though not necessarily because of direct threats from the Sahara. Direct exposure to the Sahara threatens some farming regions in the West with encroachment of sand dunes, but in many other places, including Niger and the other countries around Lake Chad, cultivated land is buffered from direct exposure to the dunes of the Sahara by a green belt of bushes and trees.

Here, the threat of desertification comes from the way people use, and overuse, the landscape. Too-frequent use of fire as an agricultural tool, cutting of trees, and overgrazing exacerbate naturally occurring droughts in this semi-arid landscape. Without vegetation to anchor the soil in place, wind erosion scours away the top soil. The loss of vegetation may even change the micro-climate of these green belts or pockets of vegetation through a reduction of humidity and rainfall. Areas that were once tenuously covered with vegetation become pockets of desert.

The high-resolution image provided above has a spatial resolution of 1 kilometer per pixel. The MODIS Rapid Response System provides this image at additional resolutions.

Pale tan dust blurs the southern edge of the Sahara Desert across the entire African continent in this natural-color satellite image from March 19, 2010.