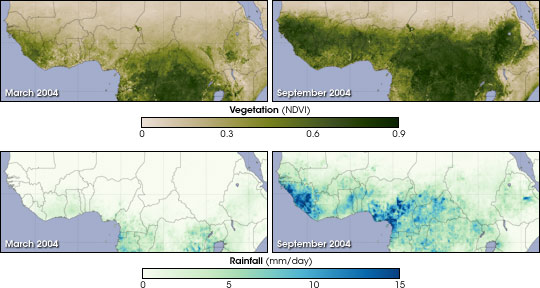 Between the vast sands of the Sahara Desert and the dense foliage of the Congo Rainforest stretches a band of semi-arid grassland. Known as the Sahel, this hardy landscape is one of Africa’s most productive crop regions. Despite its productivity, the Sahel has a dark history of famine tied to highly erratic rainfall. Starting in the early 1970s, a string of dry years drove millions to starvation across the Sahel from Ethiopia in the east to Mauritania in the west. The dry period lasted until the mid-1990s, leaving many to wonder if the Sahara was creeping south, swallowing the arable land in the Sahel. Ground studies identified farmland that had been irreversibly transformed into non-arable land. Some extrapolated from these studies to suggest that the entire Sahel was becoming desert, but the area was far too vast to conduct the extensive ground measurements that would be needed to find out if the Sahel was becoming a desert.

Instead, scientists are using satellite images such as these vegetation index images along with rainfall data to determine if the Sahel can still support plant life. Desertification is the process through which productive land (land that supports vegetation) becomes permanently non-productive (on a human time scale). Many things can cause desertification including human factors like overgrazing or other land use that leads to soil erosion or natural factors like a shift in rainfall. Desertification can be identified in satellite images by comparing rainfall to vegetation growth. If plants grow after rain falls, then the land is still productive and desertification has not happened. If plants fail to grow after rain, then the land might have become non-productive. If plants fail to grow after several years of rainfall, then the change may be permanent, and the land has been desertified.

In 2006, the Global Inventory Modeling and Mapping Studies (GIMMS) group, led by Compton Tucker at Goddard Space Flight Center, released a twenty-four-year-long satellite-based vegetation record of Africa’s Sahel. The vegetation index records the amount of photosynthesis that is happening on the ground, which is a direct measure of how much plants are growing. Studied in conjunction with rainfall, the vegetation record reveals that plants in the Sahel still grow when the region receives rainfall.

These images contrast March 2004, during the dry season, with September 2004, during the rainy season. The top images show the vegetation index while the lower images show rainfall during the same period. The Sahara Desert paints a white streak along the top of the vegetation index image, indicating that few or no plants were growing. Along the bottom of the vegetation index images, the densely vegetated Congo Rainforest is dark green. In between the two, the color in the Sahel swings from tan during the dry season to dark green during the rainy season. The densest vegetation correlates well with areas of heavy rainfall, shown in dark blue in the lower image. The correlation reveals that the Sahel is not becoming a desert on a large scale, though localized land degradation could be occurring. An animation of the vegetation and rainfall records from 1998 to 2005 shows the dance of the seasons across the Sahel with plant growth moving north as rain falls over the region.

To read more about how satellite images are used to understand desertification in Africa’s Sahel, see Defining Desertification, a new feature article on the Earth Observatory.

(Maps and animation by Robert Simmon and Jesse Allen, based on GIMMS and TRMM data. Photographs courtesy USGS and USAID.)