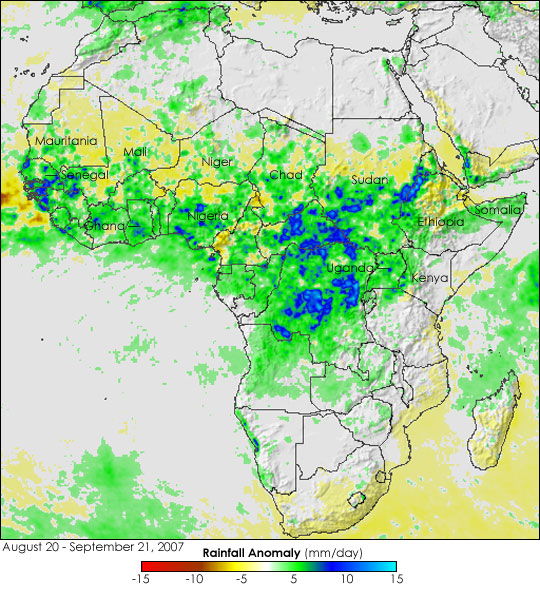 Africa’s Sahel region, a margin of semi-arid grassland around the southern limit of the Sahara Desert, gets most of its rainfall between June and September when the band of near-perpetual thunderstorms that hover around the equator shifts north. In 2007, the final months of the rainy season brought unusually heavy rainfall to much of the Sahel and the tropical savannas to its south, causing floods in river basins from the Atlantic to the Indian Ocean coasts of the continent.

This image illustrates how extensive the extreme rainfall was. The image was made with data collected by the Tropical Rainfall Measuring Mission (TRMM) satellite between August 20 and September 21, 2007. The average daily totals recorded during this period are compared with average rainfall totals recorded during the same period since TRMM’s launch in 1997. Regions that received more rain per day than average are blue and green, while places that received less rain are yellow to red. Most of the southern Sahel received more rain per day than average in August and September. Some places, marked with pale blue, got as much as 15 millimeters more rain than average per day. The northern Sahel, by contrast, was slightly drier than average, as indicated by its pale yellow tint.

The unusually heavy rains caused flooding in as many as 17 countries and affected more than a million people across Africa, reported BBC News on September 17. Some of the flooded countries are labeled in this image. Images of flood areas in Nigeria, Ghana, Senegal, Mali, Uganda, Chad, and Sudan are available on the Earth Observatory. For those areas that escaped flooding, the rains were beneficial, since farmers in the Sahel rely on rain to water their crops, reported the Famine Early Warning System Network on September 19.