Spring Bloom and Dust off Argentina 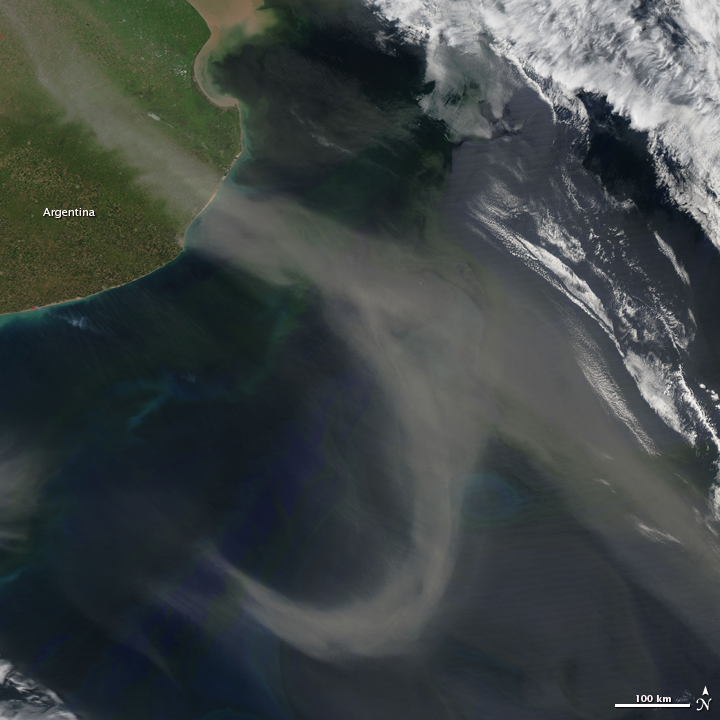 Sometimes nature puts on a spectacular show, dazzling us with unusual displays of color or whimsical patterns. On November 5, 2009, the Moderate Resolution Imaging Spectroradiometer (MODIS) on NASA’s Aqua satellite caught one such display. A pale brown plume of dust swept out of Argentina’s Pampas, a heavily farmed grassland, and split into two plumes over the South Atlantic Ocean. The wide arc and subtle curls within the dust plume complement the patterns visible in the ocean beneath it.

Peacock-colored, the South Atlantic Ocean was in full bloom: A display of blue and green streaks and swirls peek from beneath the dust storm. Cool currents and upwelling water along the edge of the continental shelf bring nutrient-rich water to the surface off the coast of northern Argentina. As a result, tiny plant-like organisms, phytoplankton, thrive in this part of the South Atlantic Ocean.

The wind-blown dust also carries iron and other nutrients that fertilize already fertile ocean waters. The surface-dwelling phytoplankton color the ocean, contributing to the brilliant color seen in the image. Sediment from the Rio de la Plata may also be contributing to the ocean color. The southern edge of the brown, sediment-filled estuary is visible along the top of the image. Like dust, sediment from river plumes also adds nutrients to the ocean, further supporting phytoplankton blooms.

The large image provided above is the highest-resolution image available. The image is available in additional resolutions from the MODIS Rapid Response Team.

The arc and waves of a pale brown plume of dust complement the swirls of blue and green in the South Atlantic Ocean in this photo-like image from November 5, 2009. 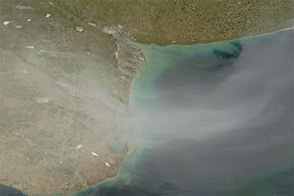 Acquired November 22, 2011, this natural-color image shows a dust plume blowing off the coast of Argentina. 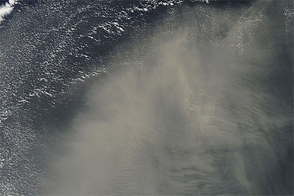 Acquired January 19, 2012, this image shows a crescent-shaped dust plume off the west coast of northern Africa.