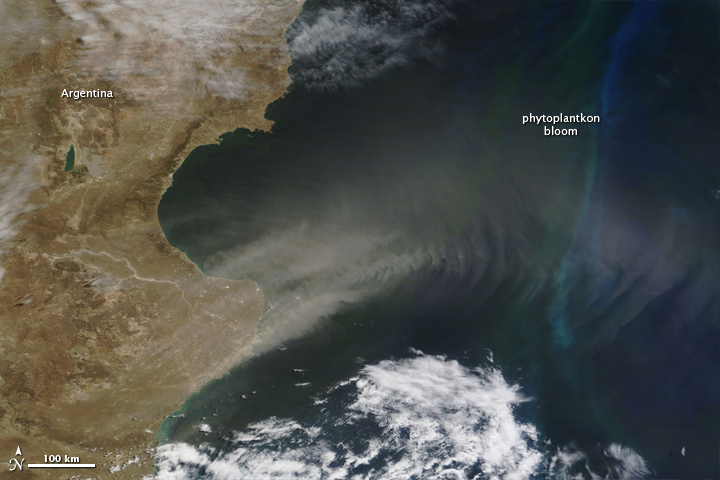 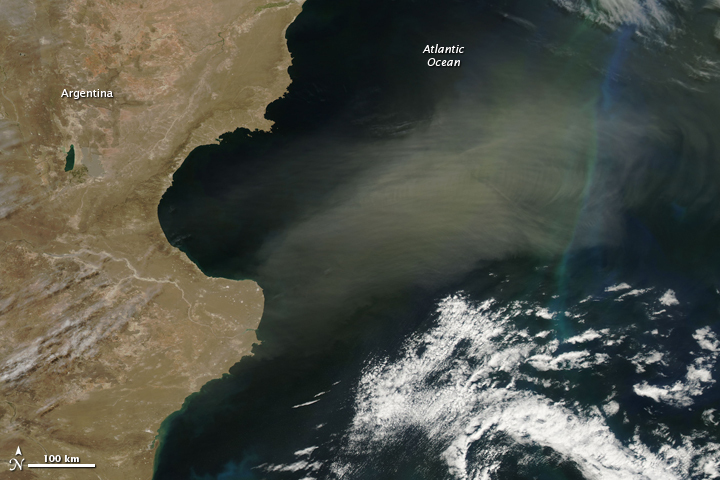 The Moderate Resolution Imaging Spectroradiometer (MODIS) sensors on NASA’s Aqua and Terra satellites tracked a dust storm moving from southern Argentina over the Atlantic Ocean on January 24, 2010. The cloud of dust was just moving off Patagonia at 11:40 a.m., local time, when Terra MODIS made its overpass. The pale dust rises from point sources on land in individual plumes that blend into a large cloud over the ocean. Turbulence in the air over the ocean creates ripples in the dust plume that echo the vertical strands of color in the ocean below. The color is from a large phytoplankton bloom, made up of millions of tiny plant-like organisms.

By 3:55 p.m., when Aqua MODIS made its overpass, dust was no longer blowing over land, but the earlier plume was concentrated over the Atlantic Ocean. The bloom provides a useful reference point for gauging how far the dust has traveled in four hours. More diffuse now, the dust cloud stretches across hundreds of kilometers.

The large images provided above are the highest resolution images available. Both the Terra MODIS image and the Aqua MODIS image are available in additional resolutions from the MODIS Rapid Response System.

Spring Bloom and Dust off Argentina

The arc and waves of a pale brown plume of dust complement the swirls of blue and green in the South Atlantic Ocean in this photo-like image from November 5, 2009.