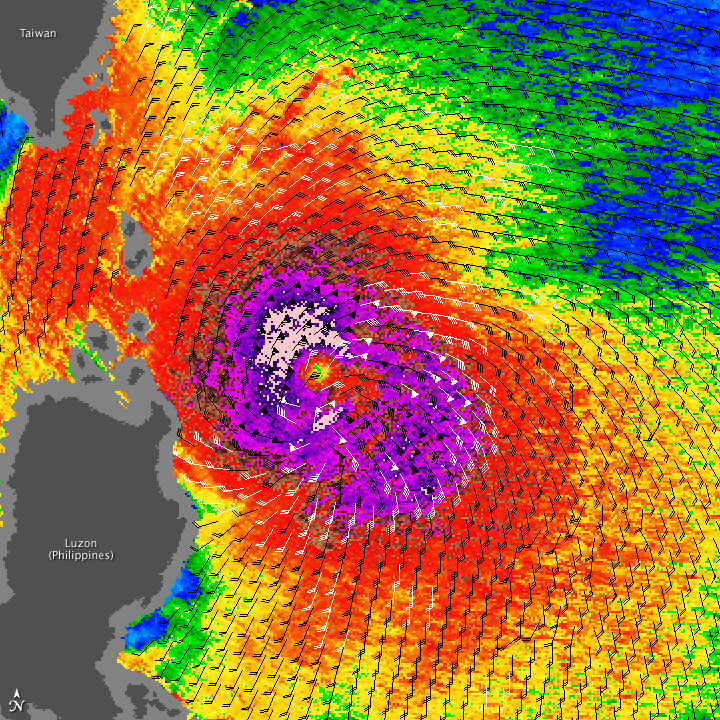 Typhoon Lupit continued heading toward the Philippines on October 22–23, 2009. QuikSCAT collected these wind measurements at 5:47 p.m. Manila time (09:47 UTC) on October 22, 2009. Wind speeds are color coded with the strongest winds, shown in pink and purple, occurring near the center of the storm. Barbs indicate wind direction.

As of 5:00 a.m. October 23 Manila time (21:00 October 22 UTC), Typhoon Lupit was roughly 285 nautical miles (approximately 530 kilometers) north-northeast of Manila, continuing its westward path in the direction of the island nation, according to the U.S. Navy’s Joint Typhoon Warning Center. At that time, Lupit had maximum sustained winds of 65 knots (120 kilometers) with gusts up to 80 knots (150 kilometers per hour).

Lupit began as a tropical depression over the Western Pacific on October 14, 2009. By October 16, the storm had strengthened to a typhoon.