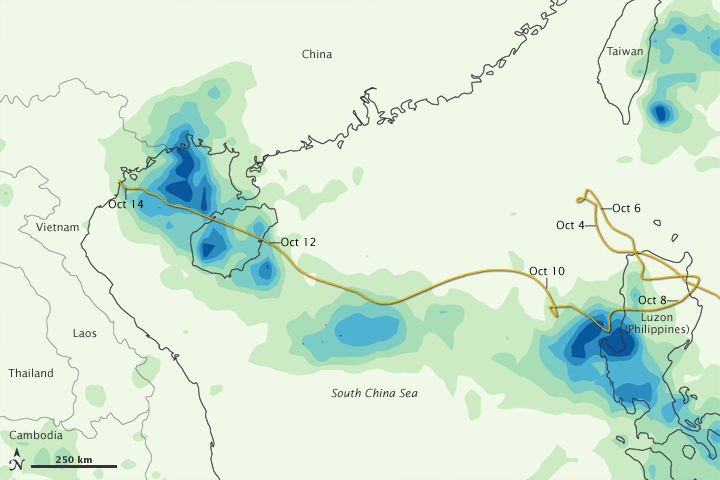 Tropical Storm Parma, which strengthened briefly to a super typhoon, persisted from September 27 to October 14, 2009, bringing heavy rains to the Philippines and Southeast Asia. This image shows the storm’s path between October 4 and October 14, as well as regional rainfall.

The pale orange line in this image shows Parma’s path between the Philippines and Southeast Asia. Parma initially formed over the western Pacific, east of the Philippines. It traveled westward over that island nation, which had just experienced floods caused by Tropical Storm Ketsana. After moving off the west coast of the Philippine island of Luzon, Parma stalled over the South China Sea and even re-approached Luzon, perhaps influenced by the proximity of Typhoon Melor. Parma was back over Luzon on October 8 before once again heading west. Between October 10 and 12, Parma traveled across the South China Sea. It passed over the Chinese island of Hainan and reached the coast of Vietnam on October 14.

This image also shows rainfall totals from October 8–14, 2009. The highest rainfall amounts—more than 300 millimeters (12 inches)—appear in blue. The lightest amounts appear in pale green. These rainfall estimates are from the near-real-time, multi-satellite precipitation analysis at NASA’s Goddard Space Flight Center; the analysis is based largely on observations from the Tropical Rainfall Measuring Mission (TRMM) satellite. The heaviest patches of rainfall appear along the west coast of Luzon and between Hainan and the coasts of Vietnam and Mainland China. Relatively heavy rainfall also occurs over the South China Sea, roughly midway between Luzon and Hainan. Heavy rainfall near Taiwan was associated not with Parma but probably with Typhoon Melor.

Storms in this region exacted a serious human toll. On October 15, 2009, China Daily reported that eight fishermen remained missing after strong winds from Parma destroyed their boats. On October 14, Agence France-Presse reported that the death toll in the Philippines from Ketsana and Parma topped 700.