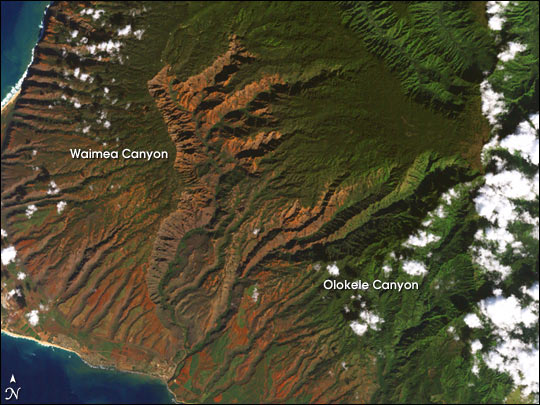 Waimea Canyon is a spectacular gorge on the island of Kaua‘i. Roughly 3,600 feet (1,097 meters) deep and 10 miles (16 kilometers) long, it is one of the most scenic regions of the Hawai‘ian islands. The canyon has a unique geologic history—it was formed not only by the steady process of erosion, but also by a catastrophic collapse of the volcano that created Kaua‘i.

Like the other Hawai‘ian islands, Kaua‘i is the top of an enormous volcano rising from the ocean floor. With lava flows dated to about 5 million years ago, Kaua‘i is the oldest of the large Hawai‘ian islands. Roughly 4 million years ago, while Kaua‘i was still erupting almost continuously, a portion of the island collapsed. This collapse formed a depression, which then filled with lava flows.

In the time since, rainwater from the slopes of Mount Wai‘ale‘ale (one of the wettest spots on Earth, with 450 inches of rain a year) have eroded Waimea Canyon along one edge of the collapse. The cliffs on the west side of the canyon are composed of thin lava flows that ran down the surface of the Kaua‘i volcano. On the other side of the canyon, the cliff walls are built from thick lava flows that pooled in the depression. Over time, the exposed basalt (a type of rock formed from lava) has weathered from its original black to brilliant red.

This image was acquired on December 26, 2000, by the Enhanced Thematic Mapper plus instrument aboard NASA’s Landsat 7 satellite.

Image by Robert Simmon, based on data provided by the Remote Sensing of Coral Reefs, Earth Sciences and Image Analysis Lab, NASA JSC