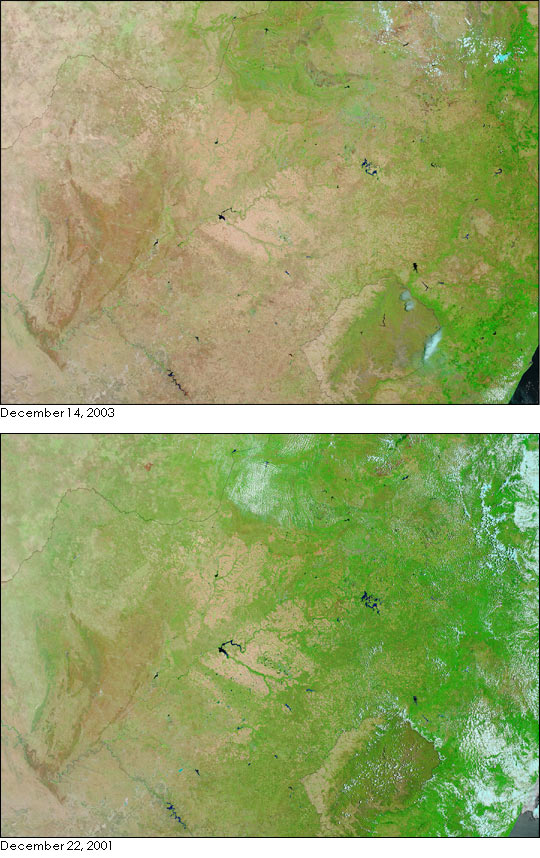 For most, the approach of the holiday season is a time of celebration, but for South African farmers, it is also the preferable time for planting a successful summer crop. Now, as the deadline looms ever closer, farmers continue to delay planting and wait for rain. The South African Council for Scientific and Industrial Research warns that South Africa may be heading for one of the most severe droughts in decades. The region is just coming out of a dry winter, preceded by a period of below-average rainfall last summer, which has left soil moisture, groundwater, and reservoir levels much lower than normal. Farmers need three to four inches of rain for ideal planting conditions, but so far, the skies have produced little moisture, and the forecast leading up to December 25 offers little hope for rain.

Low reservoir levels could be bad news for farmers who rely on them for irrigation. Power, urban, and industrial users are given top priority when water levels are low, which could leave farmers with less water for irrigation. Last year, irrigation farmers planted a record corn area, but this year less corn area is expected to be irrigated because of low water reserves and low local prices. The problem is particularly serious in the Maize Triangle, a swath of farmland between Kimberly and Johannesburg in Northeastern South Africa.

These Moderate Resolution Imaging Spectroradiometer (MODIS) images contrast current conditions in the Maize Triangle with 2001. In December 2001, bright green vegetation covers the region, but in December 2003 broad pink and tan areas of bare soil appear in its place because of a lack of rain. Many of the reservoirs, shown as black spots in these false-color images, appear to cover a smaller area in 2003 than in 2001.

The section of South Africa that includes the Maize Triangle is bordered by Botswana, in the top left corner of the image, and the South African enclave, Lesotho, in the bottom right. Real-time MODIS images of South Africa are available on FAS’s Crop Explorer and from the MODIS Rapid Response System.