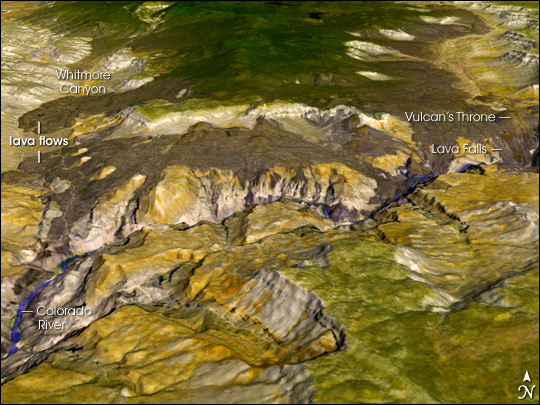 Over vast expanses of time, natural processes like floods and volcanoes deposit layers of rock on the Earth’s surface. To delve down through layers of rock is to explore our planet’s history. Sometimes rock layers are exposed through human activity, such as drilling or excavation. Other times, rivers carve through the rock. One of the best, and most well-known, examples of a river exposing ancient rocks is Colorado River in Arizona’s Grand Canyon. What fewer people know is that the Grand Canyon also has a history of relatively recent (on geologic time scales) volcanism. The evidence—hardened lava—spills down the canyon walls all the way to the river.

On June 22, 2003, the Advanced Spaceborne Thermal Emission and Reflection Radiometer (ASTER) on NASA’s Terra satellite captured this image of the Grand Canyon, near 36.2 degrees north latitude and 113.2 degrees west longitude. ASTER detects light visible to human eyes as well as “invisible” infrared light. Because different minerals reflect different portions of the light spectrum, ASTER can see varying mineral compositions of the rocks it observes, as well as detecting vegetation. In this three-dimensional visualization, lava fields appear brownish gray, darker than the layers of limestone, sandstone and other rock in the canyon. Vegetation appears green, and sparsely vegetated areas appear mustard. Water in the Colorado River is blue-purple.

Geologists estimate that between 1.8 million and 400,000 years ago, lava flows actually dammed the Colorado River more than a dozen times. Some of the lava dams were as high as 600 meters (about 1,969 feet), forming immense reservoirs. Over time, enough water and sediment built up to push the river flow over the tops of these dams and eventually erode them away. Today, remnants of these lava dams remain throughout the area, along with the much older rock layers they cover. Among the most well known examples of these “frozen” lava cascades is Lava Falls, which spills down to the river next to a cinder cone known as Volcan’s Throne. Numerous flows spread down into Whitmore Canyon, a Colorado River tributary, as well.

You can download a 15-meter-resolution ASTER KMZ file of the lava field suitable for use with Google Earth.