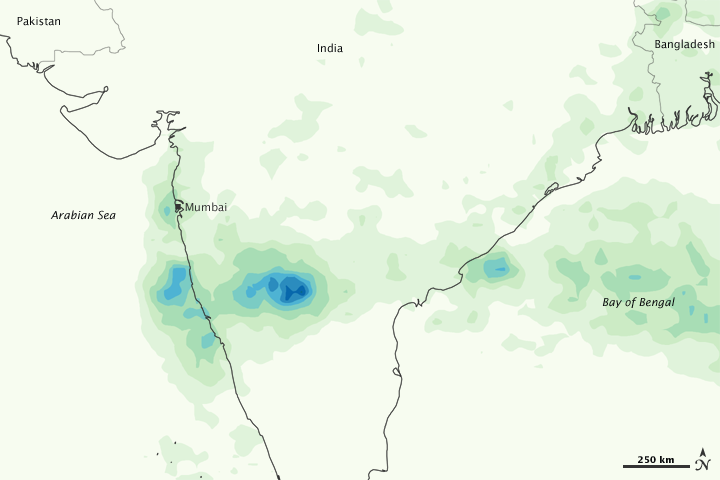 An east-west band of heavy rain fell across southern India in late September and early October 2009. The hardest hit states were Andhra Pradesh, along the east coast, and Karnataka, along the west coast. As of October 6, 2009, 194 people had died in Karnataka, and 60 more had died in Andhra Pradesh, according to the Telegraph. Between the two states, millions of people were displaced. The heavy rains destroyed homes, farms, and infrastructure.

This image shows rainfall totals from September 29 to October 5, 2009. The highest rainfall amounts—more than 600 millimeters (23.6 inches)—appear in blue. The lightest amounts appear in pale green. The rainfall estimates shown in this image were produced by the near-real-time, multi-satellite precipitation analysis at NASA’s Goddard Space Flight Center. The analysis is based largely on observations from the Tropical Rainfall Measuring Mission (TRMM) satellite.

Pockets of especially heavy rain appear south of Mumbai, and the most intense rainfall occurs southeast of the city. Rainfall extends from the Arabian Sea eastward to the Bay of Bengal. Heavy rain also occurs in Bangladesh.