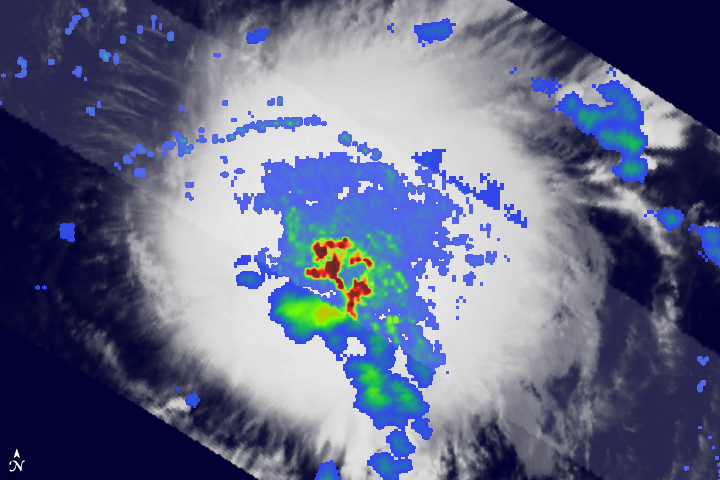 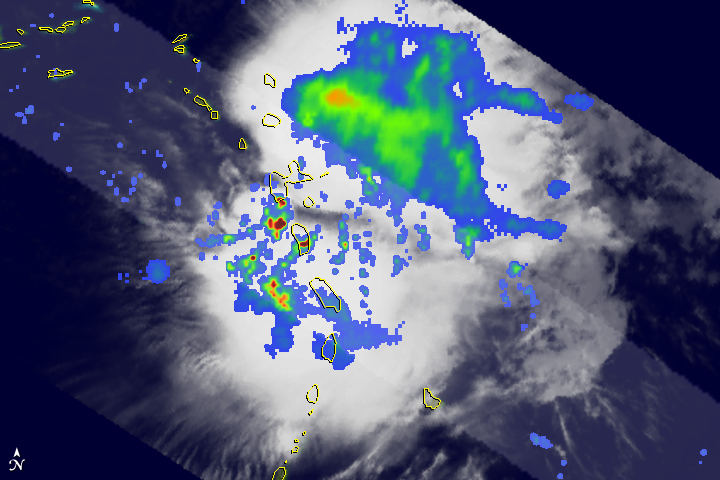 Tropical Storm Erika formed from a strong tropical wave that moved off the coast of West Africa and into the Atlantic on August 26. As the wave propagated westward through the central Atlantic, shower and thunderstorm activity associated with the wave increased. The Tropical Rainfall Measuring Mission (TRMM) satellite captured the top image of the wave at 12:07 a.m. Eastern Daylight Time (4:07 UTC) on September 1, 2009, before the system became a named tropical storm. The image shows the horizontal pattern of rain intensity within the storm. Rain rates in the center swath are based on the TRMM Precipitation Radar, and those in the outer swath on the TRMM Microwave Imager. The rain rates are overlaid on infrared data from the TRMM Visible Infrared Scanner.

TRMM reveals areas of intense rain (red) associated with strong thunderstorm activity at the center of the system. These strong showers and thunderstorms were releasing large amounts of heat, which bodes well for future intensification. However, the rain clouds had not organized into bands or begun to curve, which indicates that the system was still immature and did not have a well-defined cyclonic circulation. Later in the day, the National Hurricane Center upgraded the system to a minimal tropical storm, with sustained winds reported at 45 knots (about 50 miles per hour).

Despite the thunderstorm activity and warm waters, southwesterly wind shear kept Erika from intensifying and the system was still a minimal tropical storm at the time of the next TRMM overpass on the night of September 2. TRMM captured the lower image at 11:51 p.m. EDT on September 2 (03:51 UTC on September 3). Once again, TRMM observed that Erika did not have a well-defined cyclonic circulation: there was no eye or eyewall and very little evidence of curvature in the rain bands. At the time of this image, the National Hurricane Center reported Erika’s sustained winds to be at just 35 knots (about 40 mph).

The low-level center of the storm is located on the far western edge of the cloud mass (white area) in this image because wind shear pulled the storm apart, displacing the upper part of the storm from the lower. As of September 3, Erika was expected to continue to weaken as a result of continuing wind shear. The National Hurricane Center predicted that the storm would track off to the west-northwest in the direction of Puerto Rico and the Dominican Republic as it weakened.

Tropical Storm Erika is the latest victim of strong upper level winds probably generated by El Niño. Early September is the heart of the Atlantic hurricane season, yet in 2009, storms were having a difficult time developing despite an abundance of warm water. The main culprit is El Niño, when sea surface temperatures in the equatorial eastern Pacific are warmer than normal. The result is increased shower and thunderstorm activity in the East Pacific. The widespread, enhanced rising motion of the atmosphere in the East Pacific induces stronger-than-normal wind shear over the tropical Atlantic by increasing the strength of the winds flowing from the Pacific into the Atlantic at upper levels. These anomalous westerly winds flow in the opposite direction of the persistent low-level easterlies that normally occur in the tropical Atlantic. This increase in the vertical wind shear suppresses Atlantic hurricane activity. Hurricanes and tropical storms intensify by concentrating heat into a vertical column, and wind shear tends to tear these tall columns apart.

TRMM was placed into service in November of 1997. From its low-earth orbit, TRMM has been providing valuable images and information on tropical cyclones around the Tropics using a combination of passive microwave and active radar sensors, including the first precipitation radar in space. TRMM is a joint mission between NASA and the Japanese space agency JAXA.

Rain patterns inside Tropical Storm Erika reveal a lack of organization within the storm because of El Nino-induced winds, which tend to tear tropical storm systems apart.