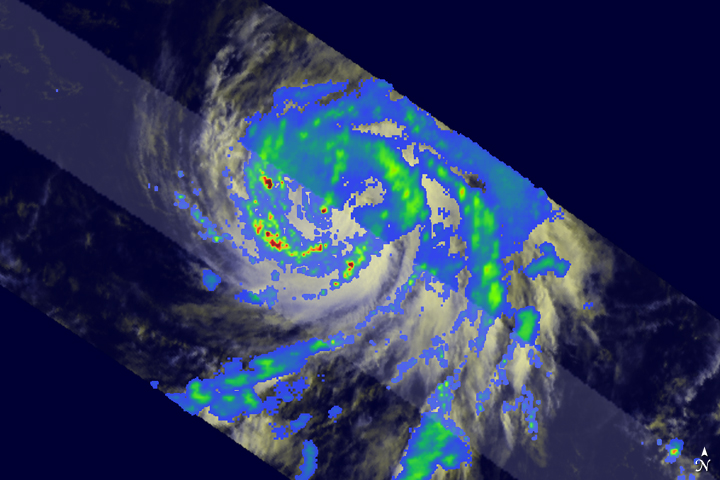 After a rather slow start, the 2009 Atlantic hurricane season saw a sudden surge in activity in mid-August with the rapid emergence of three named storms: Tropical Storms Ana and Claudette and Hurricane Bill, the first hurricane of the season. The Tropical Rainfall Measuring Mission (TRMM) satellite captured this image of Bill at 7:33 a.m. Eastern Daylight Time (11:33 UTC) on August 17, 2009, just after Bill became a hurricane. The image shows the horizontal pattern of rain intensity within the storm. Rain rates in the center swath are based on the TRMM Precipitation Radar, and those in the outer swath on the TRMM Microwave Imager. The rain rates are overlaid on infrared data from the TRMM Visible Infrared Scanner.

TRMM reveals that although Bill did not yet have an eye or eyewall, it did have a well-developed cyclonic circulation: the rain bands spiral in towards the center. Green and blue areas indicate moderate to light rain, while areas of intense rain are red. At the time of this image, the National Hurricane Center estimated Bill’s maximum sustained winds to be 120 kilometers per hour (75 miles per hour or 65 knots).

The National Hurricane Center expected Bill to continue to intensify, possibly becoming a major hurricane. It was forecast to curve northwest and be in the vicinity of Bermuda by Saturday, August 22.

Bill became a named tropical storm on the afternoon of August 15, 2009, and reached hurricane strength on August 17. The storm started as a strong tropical wave that moved off the west coast of Africa on Wednesday, August 12. Sea surface temperatures had been slightly above normal over most of the tropical North Atlantic since mid July, giving the wave the energy it needed to develop into a hurricane. The storm formed about 700 miles west-southwest of the Cape Verde Islands. Topical Depression #2, which would later become Tropical Storm Ana, had also formed in the same general area four days earlier. Storms that form in this region are known as “Cape Verde” storms. Cape Verde storms most often occur in August and September during the height of the season.

As the first hurricane of the season, Bill formed relatively late in the year. Since 2001, there have been nearly five named storms on average by the middle of August. After the first tropical depression of the season (TD #1) formed in late May, the Atlantic was quiet for two and a half months. One likely reason for the relative lull in 2009 is El Niño. During El Niño, sea surface temperatures in the equatorial eastern Pacific are warmer than average. The result is increased shower and thunderstorm activity in the East Pacific. The enhanced rising motion in the East Pacific induces stronger-than-normal wind shear over the tropical Atlantic, reducing hurricane activity.

The Tropical Rainfall Measuring Mission satellite was placed into service in November 1997. From its low-Earth orbit, TRMM has been providing valuable images and information on tropical cyclones around the tropics using a combination of passive microwave and active radar sensors, including the first precipitation radar in space. TRMM is a joint mission between NASA and the Japanese space agency, JAXA.