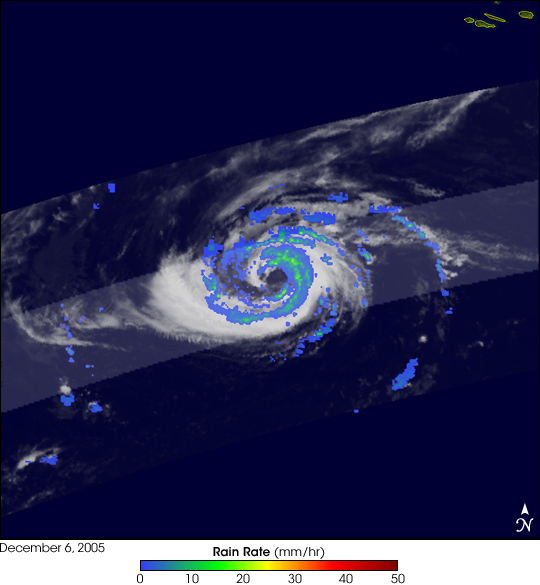 Epsilon formed into a tropical storm on November 29, 2005, from a mid-latitude, low-pressure center in the central Atlantic well east of Bermuda. Around midday (local time) on December 2, Epsilon strengthened into a minimal hurricane with maximum sustained winds estimated at 65 knots (75 mph) by the National Hurricane Center (NHC), becoming the record 14th hurricane of the season. The old record of 12 hurricanes was set back in 1969.

This image was obtained by the Tropical Rainfall Measuring Mission (TRMM) at 16:01 UTC (11:01 a.m. EDT) on December 6. Rain rates in the central part of the swath are from the TRMM Precipitation Radar (PR). Rain rates in the outer swath are from the TRMM Microwave Imager (TMI). The rain rates are overlaid on infrared (IR) data from the TRMM Visible Infrared Scanner (VIRS). The hurricane shows a fairly well-defined eye, but the eye is elongated (more oval), and the eyewall is eroded on the southwest side. These features indicate that wind shear and dry air have been taking a toll on Epsilon. Hurricane Epsilon was a minimal hurricane with sustained winds of 65 knots (75 mph) at the time of this TRMM observation. The system was moving south due to strengthening high pressure north and west of the hurricane. Epsilon was expected to continue southwestward and weaken due to increasing wind shear.

In November of 1997, the Tropical Rainfall Measuring Mission (TRMM) satellite was launched with the primary mission of measuring rainfall over the global tropics. However, TRMM’s array of passive and active sensors has proven to be a valuable platform for monitoring and studying tropical storms and hurricanes, especially over remote parts of the open ocean, such as the central Atlantic where Epsilon was located.

Although it was November, Cuba potentially faced its a third major hurricane of the season as Hurricane Paloma approached. Hurricane Paloma became an intensifying Category 2 storm on November 7, a few hours after TRMM captured this image.