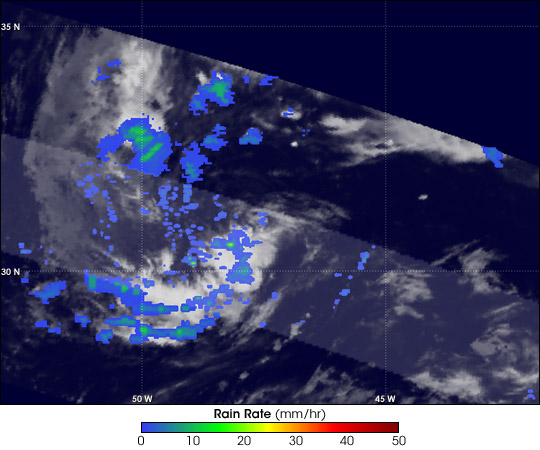 With every new storm, the 2005 Atlantic hurricane season continues to set new records. By November 29, the record for the number of named storms in a season hit 26 with the formation of Tropical Storm Epsilon. This record shattered the previous mark of 21 set in 1933. Although hurricane season officially ends on November 30 every year, the occasional rare storm can form in December. Considering the magnitude of the record-breaking 2005 hurricane season, it is not surprising that on the last day of the official season Epsilon lurked in the Atlantic.

The Tropical Rainfall Measuring Mission (TRMM) satellite has continued to monitor the extraordinary activity in the Atlantic. Armed with an array of sensors, TRMM provides unique images and information on tropical cyclones over the global Tropics, including this image of the formation of Tropical Storm Epsilon.

Epsilon formed from a mid-latitude low pressure center on November 29, 2005, in the central Atlantic about 840 miles east of Bermuda. TRMM acquired this image a short time later at 7:05 p.m. EDT on November 29, 2005, when Epsilon was still a very small storm in its earliest formative stages. Areas of moderate rain (green areas) and an area of heavy rain (red dot) are present near the center. However, there is little curvature in the rain features, a trait that distinguishes tropical cyclones, and no eye is present. At the time of this image, Epsilon had sustained winds estimated at 83 kilometers per hour (52 mph) by the National Hurricane Center.