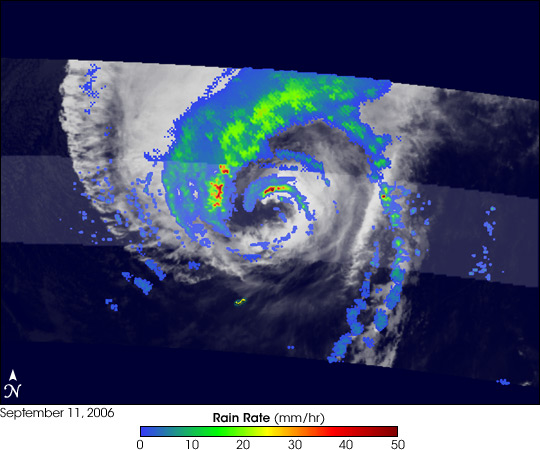 As the 2006 Atlantic hurricane season neared the typical peak of storm activity in mid-September, Hurricane Florence was making its way northward through the western Atlantic near Bermuda. Although Florence was the sixth named storm of the season, no major hurricanes had occurred as of mid-September. Before Florence, only Ernesto had managed to briefly reach minimal hurricane intensity. Florence formed from a tropical depression (low pressure area) on September 3, and it became the second hurricane of the season as it approached Bermuda. It had not exceeded Category 1 intensity, nor was it projected to become more powerful, as of September 12.

The image above shows the hurricane not long after it had passed Bermuda. The image was taken at 7:05 p.m. local time (23:05 UTC) on September 11, 2006, by the Tropical Rainfall Measuring Mission (TRMM) satellite. Rain rates in the center swath are from the TRMM Precipitation Radar, while those in the outer swath are from the TRMM Microwave Imager. The rain rates are overlaid on infrared data from the TRMM Visible Infrared Scanner. The data shows rain bands circling a rather large eye, which contains an area of intense rain (dark red arc) in the northwest eyewall. The southeastern part of the eyewall, however, appears ragged. Most of the rain was ahead of the storm (the broad blue and green area indicating light to moderate rain, respectively).

The sixth storm of the 2006 Atlantic hurricane season, Hurricane Florence formed on September 3, 2006. Florence weakened as it moved north, becoming an extra-tropical storm by September 15.