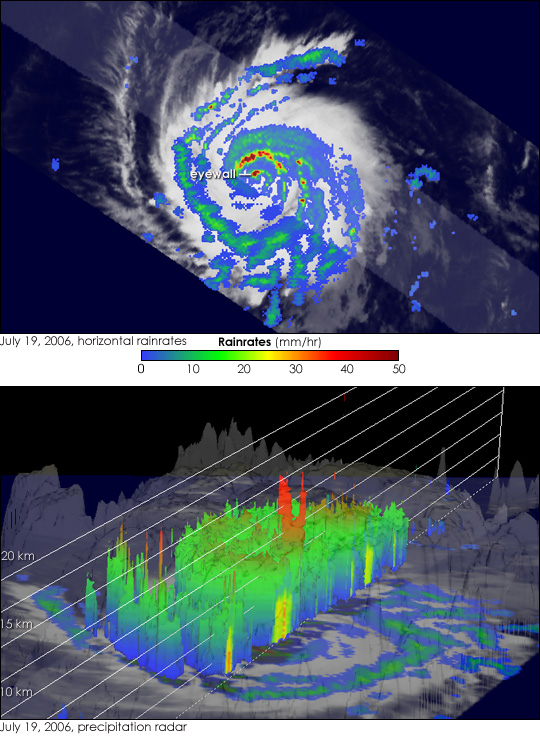 On July 18, Daniel became the third hurricane to form in the East Pacific during 2006, setting the pace of hurricane formation at about average for the region. It was already the second major hurricane in the East Pacific, which put 2006 well ahead of the pace set in 2005, during which only two major hurricanes formed for the entire season. After intensifying from a tropical depression that was tracking westward across the eastern Pacific away from land, Daniel became a named tropical storm on July 17, 2006, about 1,400 miles south of Baja California. Daniel continued to strengthen and became a minimal hurricane on the afternoon of July 18 (local time).

The Tropical Rainfall Measuring Mission satellite (TRMM) captured these images of Hurricane Daniel on July 19 at 3:29 a.m. Pacific Daylight Time (10:29 UTC), just before the storm intensified from Category 1 to a Category 4 storm. The top image shows the horizontal distribution of rain intensity (top-down view) within the storm. Rain rates in the center of the swath are from the TRMM Precipitation Radar, and rain rates in the outer swath are from the TRMM Microwave Imager. These rain rates are overlaid on infrared data from the TRMM Visible Infrared Scanner. Circles of red and green trace out the tight circling bands of rain. This tight banding, along with a nearly complete inner eyewall (innermost green arc), is evidence that Daniel was very well organized with a well-developed circulation. There is also an area of intense rain (dark red) within the eyewall. At the time of this image, the National Hurricane Center reported that Daniel was a strong Category 1 hurricane, with maximum sustained winds reported at 150 kilometers per hour (92 mph or 80 knots).

The lower image is a three-dimensional depiction of the storm from the same overpass. The image was created from data taken by the TRMM Precipitation Radar, which has the ability to look at vertical precipitation structures. The radar reveals an area of deep convection, where water-laden air is rising high and fast, right near Daniel’s center. This area shows up as red peaks that are about 15 kilometers high. The peaks are associated with the area of heavy rain within the eyewall in the previous image. The presence of such towers can be a precursor for intensification when they are near the storm’s core. This was indeed the case with Daniel, which steadily increased in intensity after these images were taken, reaching Category 4 intensity on July 20, with maximum sustained winds of 220 km/hr (138 mph or 120 knots) as reported by the National Hurricane Center. Daniel was expected to gradually turn to the northwest and weaken over cooler waters.

TRMM was placed into service in November of 1997. From its low-earth orbit, TRMM has been providing valuable images and information on tropical cyclones around the Tropics using a combination of passive microwave and active radar sensors, including the first precipitation radar in space. TRMM is a joint mission between NASA and the Japanese space agency, JAXA.

Hurricane Daniel formed on July 16, 2006, off the Mexican Pacific coast.