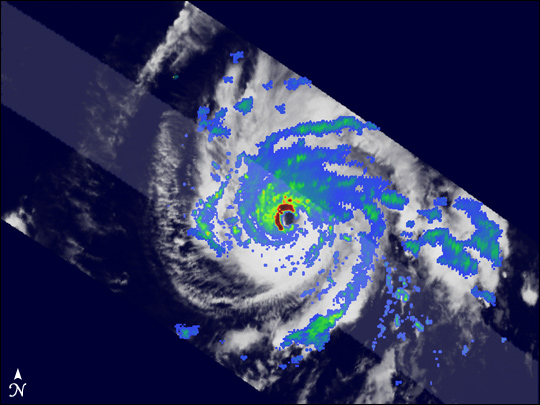 Hurricane Ioke started as all tropical cyclones do, as a depression—an area of low atmospheric pressure. After forming on August 19, 2006, the depression quickly developed into a tropical storm, the threshold for earning a name. Ioke is the Hawaiian word for the name “Joyce.” Storms and hurricanes in the central Pacific are unusual, but they occur often enough for there to be a naming convention, applied by the Central Pacific Hurricane Center in Honolulu. The last named central Pacific storm was Huko in 2002. Ioke rose all the way to hurricane strength in less than 24 hours.

This image of Hurricane Ioke shows the powerful Category 4 hurricane as it was passing south of the Hawaiian Islands. The image was taken by the Tropical Rainfall Measuring Mission (TRMM) satellite at 20:45 UTC (9:45 a.m. HST) on August 21, 2006, and it shows the horizontal pattern of rain intensity within Ioke. Rain rates in the center of the swath are from the TRMM Precipitation Radar, and those in the outer swath come from the TRMM Microwave Imager. The rain rates are overlaid on infrared data from the TRMM Visible Infrared Scanner. A well-defined eye (dark center) marks the center of Ioke. This eye is surrounded by an area of very intense rain on the western side, which is part of the eyewall (dark red arc). Rain bands spiral inwards towards the center (large blue arcs) and transition into an area of moderate rain (green area) as they approach the eyewall. These features are typical of a mature, intense hurricane. At the time of this image, Ioke was estimated to have sustained winds of 184 kilometers per hour (132 miles per hour) by the Central Pacific Hurricane Center.

The TRMM satellite was placed into service in November 1997. From its low-earth orbit, TRMM has been providing valuable images and information on storm systems around the tropics using a combination of passive microwave and active radar sensors, including the first precipitation radar in space. TRMM is a joint mission between NASA and the Japanese space agency, JAXA.