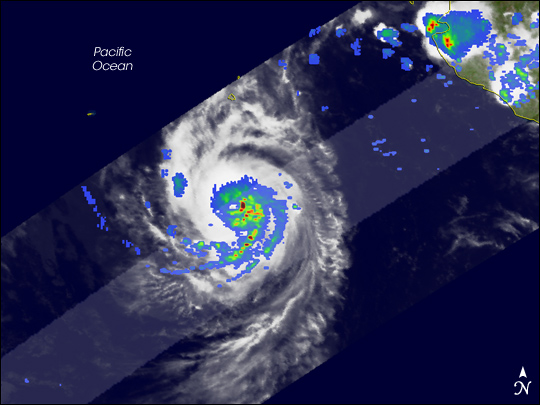 Hurricane Paul, the 10th hurricane of the season in the East Pacific, began as a tropical depression (area of unusually low air pressure at the ocean surface) during the early morning hours of October 21, 2006 (local time), about 265 miles south-southwest of Manzanillo, Mexico. Paul reached hurricane intensity on the afternoon (local time) of October 22.

The Tropical Rainfall Measuring Mission (TRMM) satellite captured this image of Paul at 5:15 p.m. Pacific Daylight Time on October 22 (00:15 UTC, October 23), as the storm was transitioning from a tropical storm into a hurricane. The image is a top-down view of where the heaviest rain was occurring. Rain rates in the center of the swath come from the TRMM Precipitation Radar, while those in the outer swath are from the TRMM Microwave Imager. These rain rates are overlaid on infrared data from the TRMM Visible Infrared Scanner.

A small eye is visible near the center of the storm, with several moderate-intensity bands of rain (green arcs) spiraling inward from the south. These rainbands are the tell-tale signs of a developed circulation. Scattered areas of heavy rain (shown in red) are also evident, including one in the storm’s eyewall (central ring of clouds) just to the east of the center. At the time of this image, the National Hurricane Center (NHC) estimated Paul had sustained winds of 55 knots (63 miles per hour). Paul became a hurricane just a few hours later.

From its low-earth orbit, TRMM has been providing valuable images and information on tropical cyclones around the Tropics since 1997, especially over open ocean where direct observations are limited. TRMM is a joint mission between NASA and the Japanese space agency, JAXA.