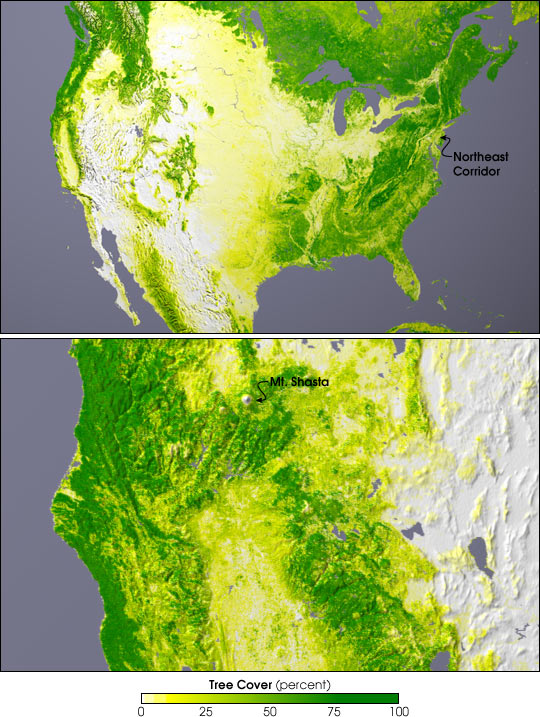 Trees are the interface between earth and sky. They draw water from the soil and give it back to the atmosphere as water vapor. They draw carbon from the air and give it back to the soil when their leaves, stems and trunks decay. Knowing where and how dense our planet’s forests are makes it easier for scientists to understand nature’s interrelated biological, geological, and chemical cycles. Up-to-date maps of tree cover guide forest and conservation policy, and over time, they can document human exploitation of forested landscapes.

Satellite observations are the best way to make routine global maps of Earth’s tree-covered landscapes. Led by ecologist Matt Hansen, scientists from the University of Maryland recently created a global tree cover data set from roughly a year’s worth of observations collected by NASA’s Moderate Resolution Imaging Spectroradiometer (MODIS) sensor. The team used the satellite data to map tree cover at a spatial resolution (detail) of 500 meters by 500 meters. The images above show the team’s results for (top) the United States and parts of Canada to the north and Mexico to the south, and (bottom) a close up of the northern Central valley of California.

In shades of white (no tree cover) to deep green (100 percent tree cover), forest cover over the region clearly varies widely both from natural and human factors. Along the eastern seaboard, what was once a vast uninterrupted forest is now punctuated by several areas of low tree cover, showing the location of some of the U.S.’s most densely populated and developed regions. The most obvious location is halfway down the east coast, where the cities of New York, New Jersey, Maryland, and Virginia, as well as the nation’s capital, have created a “clearing” in the continent’s original forest. The low tree cover in the central part of the continent is now a mixture of remnant prairies and agricultural lands.

In the bottom image, the tree-cover is influenced by natural topographic and climatic factors as well as human land use. The large area at right that harbors no trees is part of the West’s arid Great Basin, which dominates most of Nevada. The Great Basin is in the “rain shadow” of the mountain ranges to the west. When moisture-laden air rises up over the mountains, condensation occurs, releasing much of the potential rain before the air ever reaches the Basin, preventing trees from growing there. Human influence is visible surrounding Mt. Shasta, where the forest appears patchy, probably due to development and logging. Shasta’s altitude—4,316 meters— puts the summit well above treeline.