Flooding on the Cuvelai River, Namibia 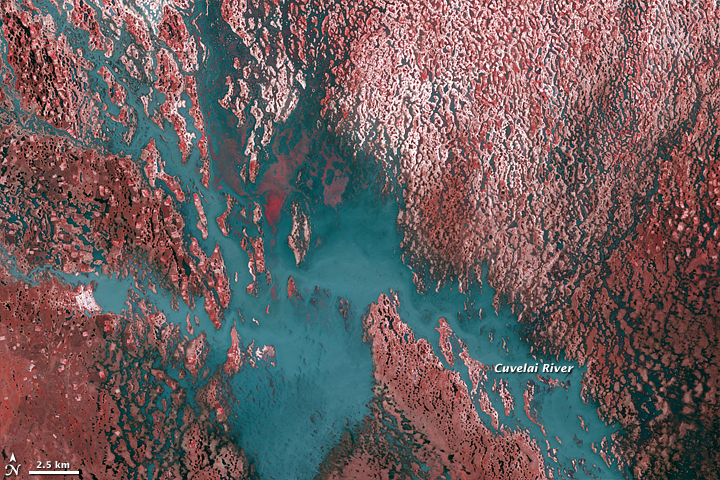 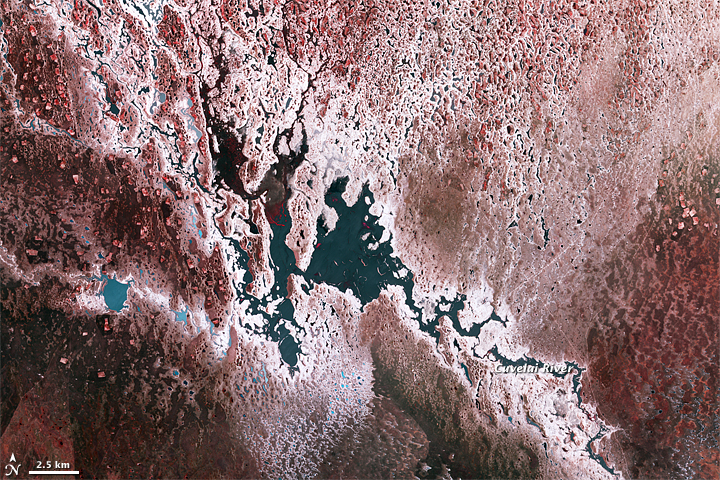 The Cuvelai River basin is not so much a traditional river with a well-defined course, as a series of small waterways that occasionally channel water across the flat landscape of northern Namibia into the Etosha Pan, a vast, usually dry lake bed. Seasonal downpours bring a rush of water to the Cuvelai basin, supplementing the basin’s few permanent water features. In 2009, the seasonal floods were extreme, forcing evacuations in communities throughout the basin.

The top image, captured by the Advanced Spaceborne Thermal Emission and Reflection Radiometer ASTER on NASA’s Terra satellite, shows the convergence of several channels of the Cuvelai immediately north of the Etosha Pan (not shown) on March 28, 2009. The lower image shows the region on April 29, 2000, a year when the area did not experience extreme flooding. Plant-covered land is red in these images, while water is blue and black.

The flooding is so extreme in the 2009 image that it is difficult to tell that the images show the same region. Wide swaths of land are covered in a web of blue in the top image. A close look at the lower image reveals signs of past flooding in the same region. The places that flooded in 2009 were channels in 2000, empty riverbeds waiting to be filled. The ground in these channels is white, indicating that the land is bare or sparsely vegetated.

Though none of the impacted communities are visible at this scale, floods in the Cuvelai basin and on the Zambezi and the Okavango Rivers displaced 13,000 people and left 92 dead, said the United Nations. The floods also destroyed crops, putting the region at risk for food shortages.

Wide channels brimming with water transform the Cuvelai basin in this image of flooding, taken on March 28, 2009.

The northern Namibian city of Ondangwa seems to be built on a sponge in these images, which show flooding around the city on March 28, 2009.