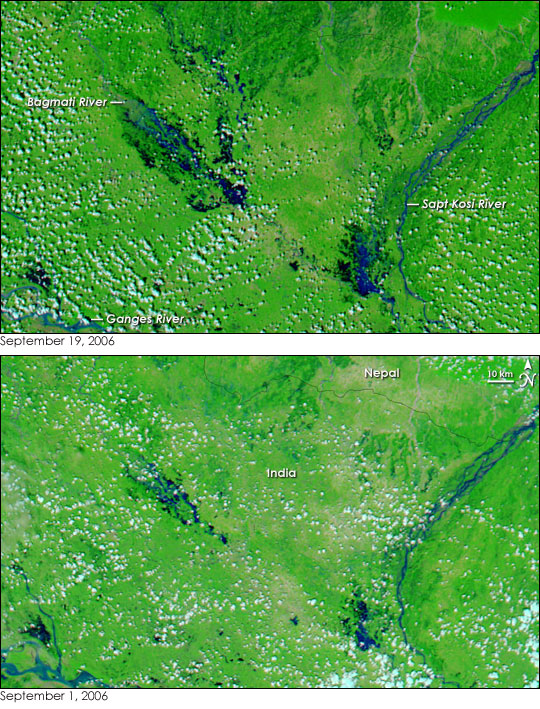 Monsoon rains usually bring floods to southern Asia, but 2006 saw exceptionally wide-spread flooding. On September 19, 2006, the Moderate Resolution Imaging Spectroradiometer (MODIS) on NASA’s Terra satellite captured the top image of flooding on the Bagmati River in northeastern India. The lower image shows the region on September 1, when water levels were closer to normal. In these images, made with infrared light to help differentiate between mud-colored water and land, water is dark blue or black. Plant-covered land is green, bare or sparsely vegetated land is tan, and clouds are pale blue and white. On September 19, not only was the Bagmati River flooded, but patches of black throughout the image hint at widespread flooding along other waterways. According to the United Nations Development Program, floods in Bihar (the region shown here) had killed 14, destroyed 1,129 houses; damaged 3,334 houses; and damaged 75,000 hectares of crops.

The large images provided above are at MODIS’ maximum resolution of 250 meters per pixel. Daily images of northern India are available from the MODIS Rapid Response Team in a variety of resolutions.