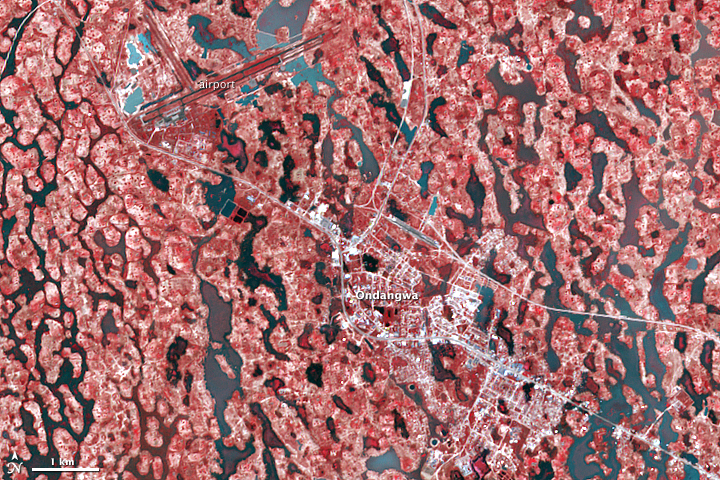 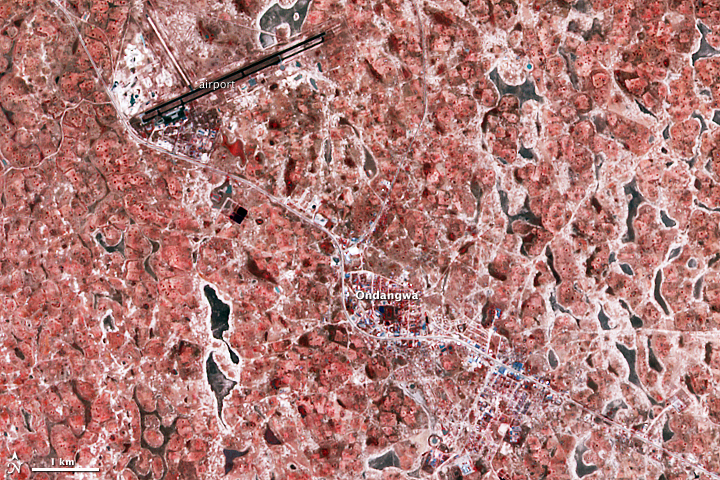 The northern Namibian city of Ondangwa seems to be built on a sponge in these images, acquired by the Advanced Spaceborne Thermal Emission and Reflection Radiometer ASTER on NASA’s Terra satellite. The sponge-like texture comes from pools and channels of blue water that marble the surface of the land. The land itself is mottled in these false-color images. Plant-covered land is red and bare earth is dusty white. The tiny bright red flecks that punctuate the landscape, particularly on the left side of the image, are probably agricultural fields. In contrast to this uneven mixture of colors and textures, the city is an even grid of bright white. When the top image was taken on March 28, 2009, the city was battling extensive seasonal flooding. The lower image was taken on April 29, 2000, a drier year.

The contrast between the two images illustrates the extent of the flood immediately around Ondangwa. Water encroaches on portions of the city and the airport to the northwest. The contrast also reveals that Ondangwa grew substantially between 2000 and 2009. Several new roads and new neighborhoods are evident in the top image.

By March 28, when the top image was taken, the floods in this region had started to subside. The floods occurred throughout the Cuvelai basin, a network of waterways that drains parts of southern Angola and northern Namibia. (See Flooding on the Cuvelai River, Namibia for a wider view.) Ondangwa was only one of many Namibian communities impacted by floods in 2009. Floods in the Cuvelai basin and on the Zambezi and the Okavango Rivers displaced 13,000 people and left 92 dead in the country, said the United Nations. The floods also destroyed crops, putting the region at risk for food shortages.

The northern Namibian city of Ondangwa seems to be built on a sponge in these images, which show flooding around the city on March 28, 2009.

Flooding on the Cuvelai River, Namibia

Wide channels brimming with water transform the Cuvelai basin in this image of flooding, taken on March 28, 2009.

By the time the Advanced Spaceborne Thermal Emission and Reflection Radiometer (ASTER) on NASA’s Terra satellite passed over Des Moines, Iowa, on June 29, 2008, and captured this image, the floods that had struck the city in mid-June when an aging levee failed were no longer apparent in the city itself. However, downstream (southeast) of the city, the flooding remained dramatic.