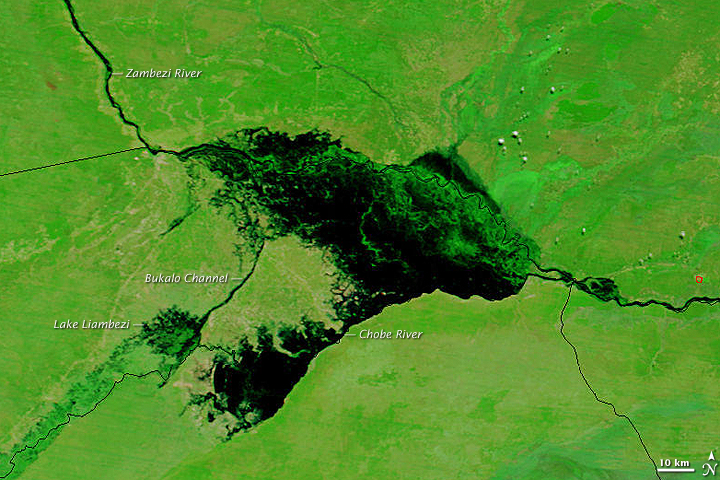 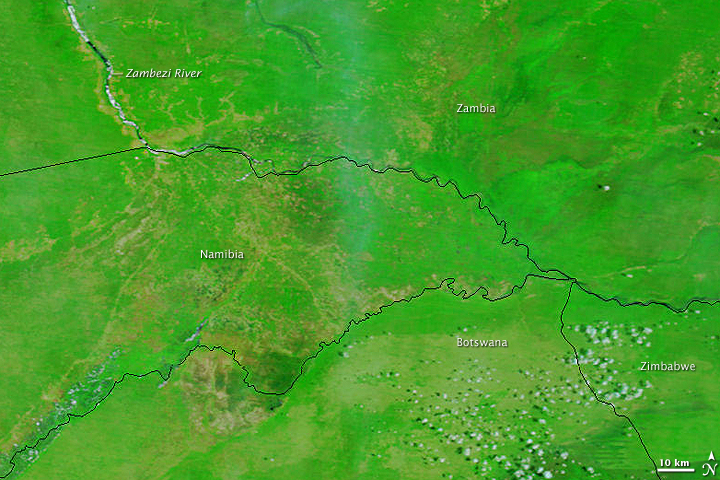 Water levels on the Zambezi River in southern Africa remained high on April 14, 2009, when the Moderate Resolution Imaging Spectroradiometer (MODIS) on NASA’s Terra satellite captured the top image. The swollen river had destroyed crops and forced thousands of evacuations in Namibia’s Caprivi region as of April 12, reported the AFP news service.

Water, black in this false-color image combining visible and infrared light, stretches across kilometers of land that were dry in January (lower image), before seasonal rains started. Plant-covered land is green, and bare earth is tan. A single fire in southern Zambia is outlined in red. Clouds are light blue and white. The flooded Zambezi spills over into the Chobe River, the Bukalo Channel, and Lake Liambezi in the April 14 image.

The Zambezi River routinely floods during the annual rainy season, but in 2009, the floods were more extensive than normal. As of April 12, water levels were still rising, reported the AFP. The United Nations Office for the Coordination of Humanitarian Affairs expected the floods to last through mid-May. Daily images of the flood region are available from the MODIS Rapid Response System.

At least 350,000 people were affected by flooding in Namibia during the annual rainy season in southern Africa in March 2009. Nearly 100 people died, and more than 10,000 were displaced as the Zambezi River rose to its highest level in 40 years.