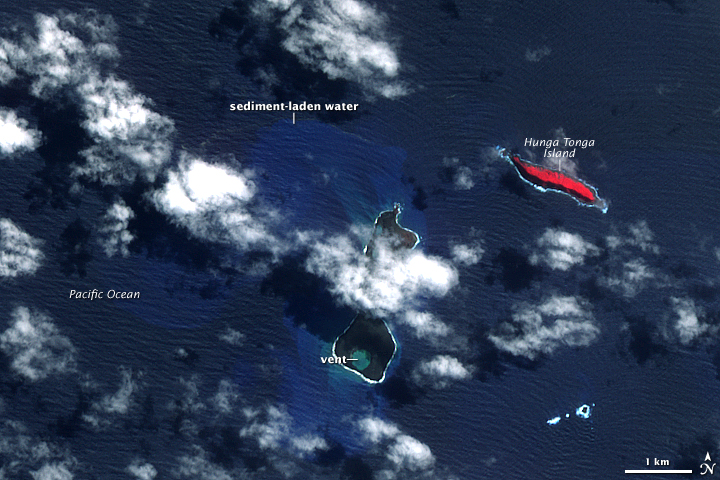 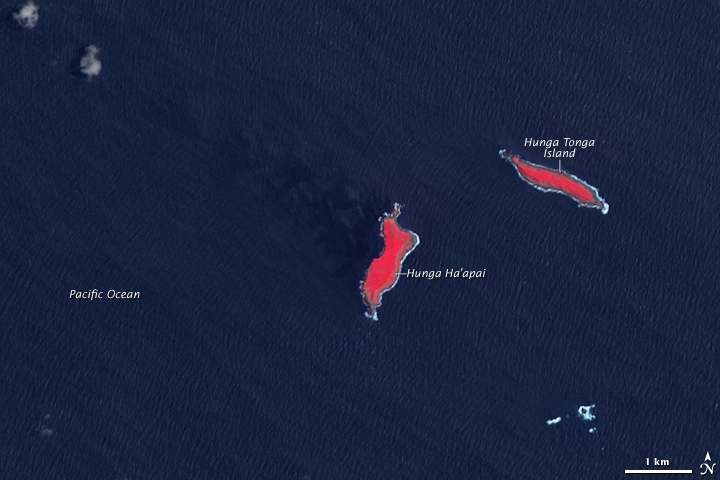 In mid-March 2009, a plume of ash and gas burst out of the ocean as an undersea volcano began to erupt in the South Pacific nation of Tonga. Small sections of the rim of the large volcano had been above water, forming the islands of Hunga Tonga and Hunga Ha'apai. The eruption occurred at two vents, one submerged and the other on Hunga Ha'apai. The eruption pumped out enough rock and ash that by March 25, when the Advanced Spaceborne Thermal Emission and Reflection Radiometer (ASTER) on NASA’s Terra satellite captured the top image, the submerged vent was surrounded by new land.

The new land is the dark mass south of Hunga Ha'apai. It was not present when ASTER acquired the lower image on November 14, 2006. In the March 25 image, clouds cover the space between the new land and Hunga Ha'apai, but news reports indicate that the new land connects Hunga Ha'apai with the underwater vent, essentially enlarging the small island. The vent itself is the nearly perfectly circular hole near the southern edge of the new land.

The image reveals some of the other impacts of the eruption. The ocean around the erupting volcano is bright blue, likely colored with ash, rock, and other volcanic debris. The eruption also killed or damaged plants on Hunga Ha'apai. In these false-color images, plant-covered land is red. In 2006, Hunga Ha'apai had supported vegetation, but after the eruption, the island was black. Either the plants were buried in ash or dead in the wake of the eruption. According to a visiting reporter, the eruption destroyed plant and birdlife on the island, leaving blackened tree stumps and dead birds and fish.

New land emerged in the South Pacific after the dramatic eruption of an undersea volcano.