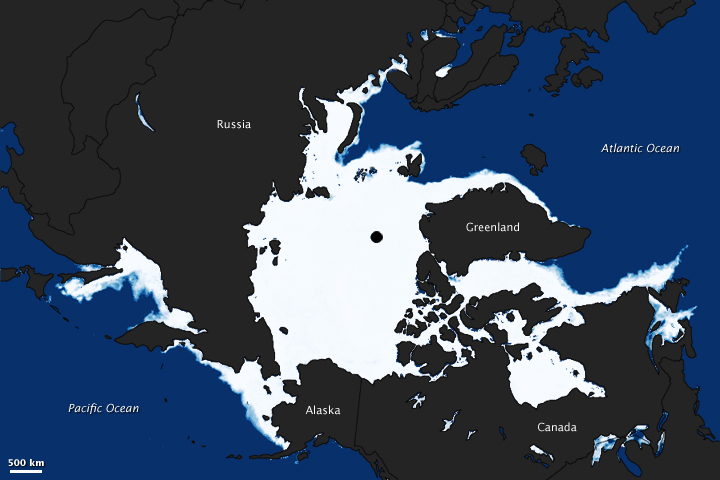 For most of us, the changing of the season comes subtly: the air warms and a flush of green gradually emerges, or coolness descends and plants fade through shades of red, orange, and brown. But at the poles, the changing season is an event, clearly defined by the passage of the Sun across the sky. In 2009, March 20 marked the Vernal Equinox, the first day that the Sun rose over the North Pole and did not set. The Sun will not set again over the North Pole until the Autumnal Equinox in September.

It is no coincidence that mid-March also marks the maximum extent of Arctic sea ice. Deprived of light and direct heat from the Sun all winter, the Arctic Ocean has had several months to freeze. This image shows the extent of the sea ice, as measured by the AMSR-E sensor on NASA’s Aqua satellite, on March 15, 2009, when the ice was at or near its maximum. White, representing ice, covers most of the Arctic Ocean, stretching from North America to Asia. The southern extent of the sea ice reaches the Gulf of St. Lawrence off North America and northern Japan off Asia. After the Vernal Equinox, the Arctic will receive constant energy from the Sun, and the much of the sea ice will gradually melt.

The South Pole also experiences a 24-hour day at equinox. As in the north, the Sun skims around the horizon. But in the south, the equinox marks the end of the summer. On March 21, the Sun will set for the first time in months, and the days will grow shorter until winter darkness descends for good.

Arctic sea ice reaches its maximum extent in mid-March, around the time of the Vernal Equinox. After the Equinox, sunlight shines at the North Pole constantly until fall, and the sea ice will gradually decline.