(MODIS) on NASA’s Aqua satellite captured this image of lingering sea ice in the Southern Ocean."> 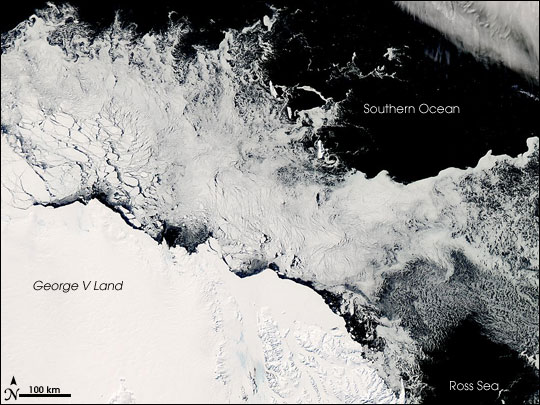 On February 24, 2008—late summer in the Southern Hemisphere—the Moderate Resolution Imaging Spectroradiometer (MODIS) on NASA’s Aqua satellite captured this image of lingering sea ice in the Southern Ocean about 1,000 kilometers north of McMurdo Station, the United States’ Antarctic research hub. Large floes of ice are still visible in the near-shore waters in the left hand side of the image, but much of the remaining ice is in much smaller pieces. At the edge of the ice margin, the pieces of ice are small enough that at this spatial resolution (level of detail) they look like froth.

The image illustrates a few of the reasons that Antarctic sea ice is more likely to melt in the winter than Arctic sea ice. The most obvious is that the ice is free to drift away from the continent into warmer waters farther north. This freedom to move also means that Antarctic sea ice is less likely to be jostled together in collisions that create thick ice ridges. As a result, “Antarctic ice is typically 1 to 2 meters (3 to 6 feet) thick, while most of the Arctic is covered by sea ice 2 to 3 meters (6 to 9 feet) thick. Some Arctic regions are covered with ice that is 4 to 5 meters (12 to 15 feet) thick,” according to he National Snow and Ice Data Center.

Other reasons for the differences are illustrated by the image as well. The sea ice in the Arctic Ocean is at the highest latitudes of the Northern Hemisphere, some of it literally at the North Pole, which means it experiences the longest, darkest winters and the shortest summers possible on the planet. Since the continent of Antarctica itself (bottom left of image) actually occupies the South Pole, the sea ice that forms in the Southern Ocean develops at lower (closer to the equator) latitudes, which get more summertime sunlight. Also, the continent itself remains frozen even in summer; no large rivers pour fresh water—which freezes more quickly than salt water—into the Southern Ocean. In contrast, seasonal thaws of rivers in Canada and Siberia deliver fresh water to the Arctic Ocean each summer.

To read more about the differences between Arctic and Antarctic sea ice, please visit the National Snow and Ice data Center’s All About Sea Ice: Arctic vs. Antarctic Webpage.