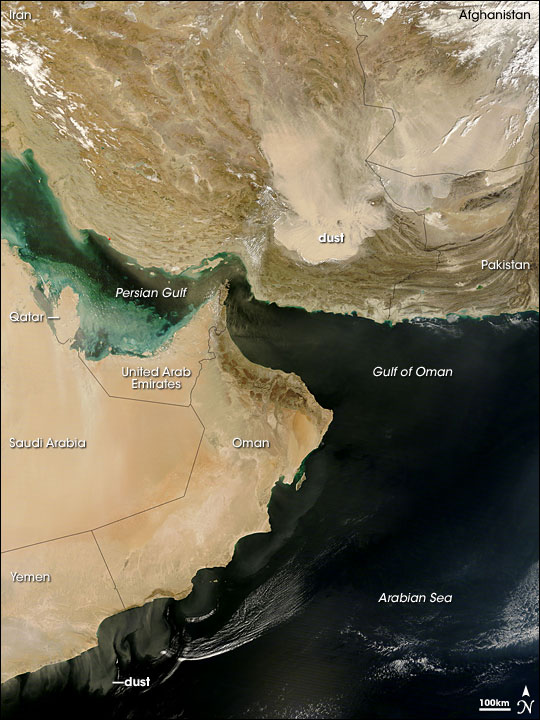 Although common during the summer, dust storms are relatively rare during the winter in the Middle East. Yet on February 21, 2008, dust plumes blew over Iran, Afghanistan, and Pakistan, and off the coasts of Yemen and Oman. The Moderate Resolution Imaging Spectroradiometer (MODIS) on NASA’s Terra satellite took this picture the same day.

This picture shows a complex of dust plumes several hundred kilometers across, blowing southward over Iran, Afghanistan, and Pakistan toward the Gulf of Oman. In the west, a smaller plume blows off the Iranian coast over the Persian Gulf. In the northern part of the image, the plumes are thick enough to completely obscure the view of the land or water underneath. In contrast to the opaque plumes in the north, thinner, more translucent plumes blow off the coasts of Yemen and Oman, over the Arabian Sea.

Besides dust plumes, this image also shows unusually thick sediment in the Persian Gulf, which colors the sea water pale green. The same winds that stirred the dust on land may have kicked up waves and currents that mobilized sediments on the sea floor in that area.

Just days before these dust plumes moved over the Middle East, strong dust storms struck Kuwait, to the west—two storms in four days. That dust interfered with air traffic and forced the closure of three ports, according to news reports. Dust storms continued in the region the day after this picture was taken. The senior meteorologist at the Kuwait Meteorology Department described the winter of 2007-2008 as the third driest since 1957. Such unusually dry conditions can increase the possibility of dust storms, even during the winter.