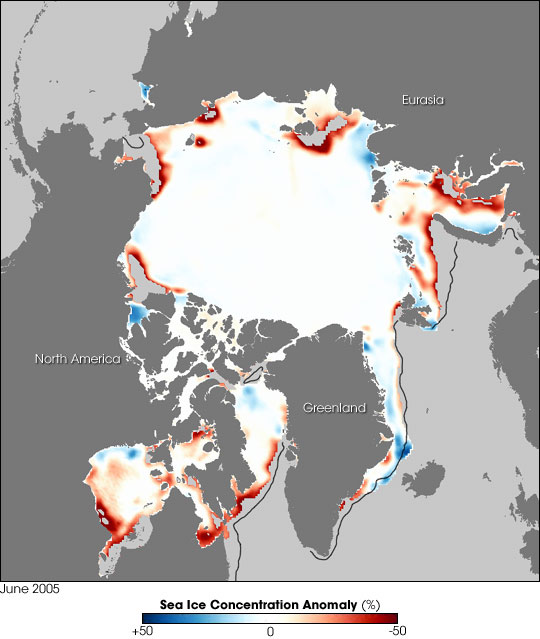 June marks the beginning of the melt season for Arctic sea ice, which reaches its minimum extent at the end of the season in September. In the past few Septembers, Arctic sea ice concentration (the amount of ice in a given area) has been markedly reduced. September 2002 set a new record low at 15 percent below average. It was followed closely by September 2003 and September 2004. So far, 2005 is shaping up to be another record-low sea ice year in the Arctic.

This image shows places where Arctic sea ice was above (blue) or below (red) average in June 2005, the end of the first month of the melt season. The images are made from data from the satellite-based, Scanning Multi-channel Microwave Radiometer (SMMR) and Special Sensor Microwave/Imager (SSM/I). Ice-free areas appear in light gray, and landmasses appear in dark gray. The black line shows the median ice edge for 1979 through 2000. Except for a small area in the East Greenland Sea, Arctic sea ice has retreated almost everywhere in June 2005. The month set a new record low: 6 percent below the long-term mean for June sea ice extent.

Different explanations have been proposed for Arctic sea ice decline, including the strong positive mode of the Arctic Oscillation (AO). This oscillation is an alternating pattern of atmospheric pressure at polar latitudes and mid-latitudes. In the early 1990s, the AO was in positive mode. In that mode, the AO produces a strong polar vortex, and resulting winds tended to flush older, thicker ice out of the Arctic. Since the late 1990s, however, the AO has been much more neutral, yet Arctic sea ice decline continues. Another explanation for declining sea ice is climate change. Global temperatures have risen, and climate models generally agree that one of the strongest signals of greenhouse warming is a loss of Arctic sea ice. Changes in surface albedo provide another, related explanation. Just as light clothes reflect the Sun’s heat on a hot day, bright sea ice reflects much of the Sun’s energy back into space. As sea ice melts, less energy is reflected back into space, and more energy is absorbed by the darker ocean waters. This creates a “feedback loop” in which sea ice decline fosters further decline.