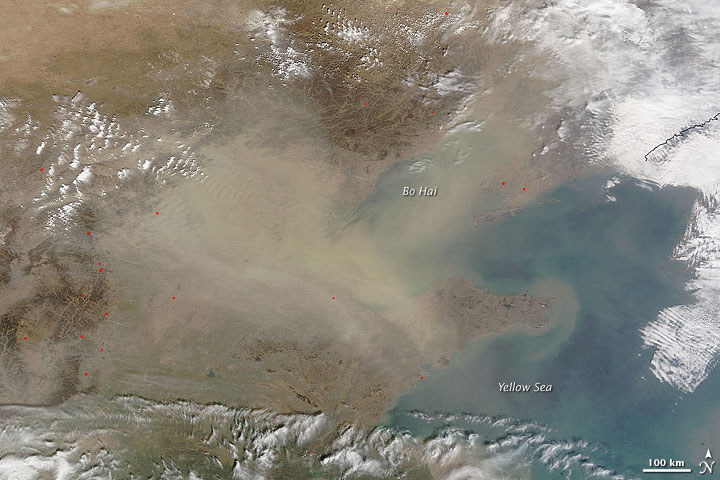 Each spring, yellow dust migrates from China’s interior to the nation’s east coast. The first such storm struck eastern China in mid-March 2009, according to news reports. The Moderate Resolution Imaging Spectroradiometer (MODIS) on NASA’s Terra satellite captured this image of eastern China on March 15, 2009. The dust forms an amorphous blob in this image, hiding part of the Bo Hai coastline, and completely hiding the city of Beijing (slightly northwest of image center). Isolated red dots indicate where MODIS detected fires. The fires may contribute some smoke to the haze, but the plume’s tan color suggests that it consists primarily of dust.

Agence France-Presse reported that Chinese authorities predicted especially severe dust storms for the spring of 2009 because northern China and Mongolia had suffered the worst drought in 50 years. Northerly winds also played a role in the mid-March storm by kicking up dust from work sites in Beijing.

In 2005, scientists warned (in the journal Nature) that China’s dust storm season was getting worse for a variety of reasons, including desertification and human-exacerbated drought. From A.D. 300 to 1949, northwestern China experienced an average of one dust storm every 31 years. After 1990, the rate increased to a dust storm almost every year.

Dust from China's interior deserts moved eastward across the country in mid-March 2009.