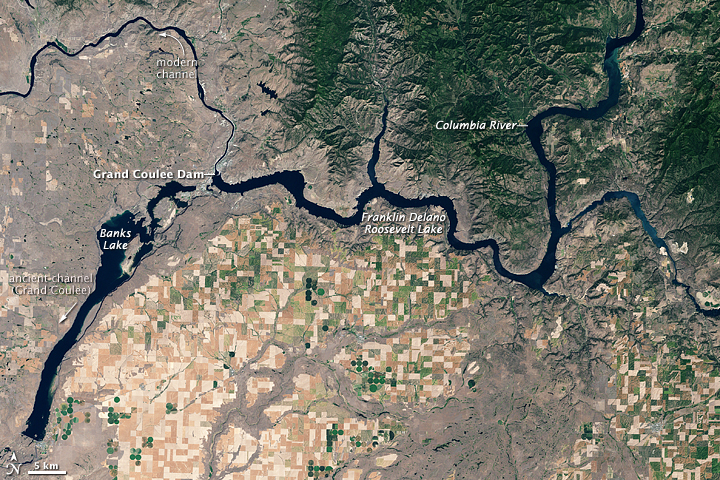 Begun in 1933 and completed in 1942, Washington State’s Grand Coulee Dam created the Franklin Delano Roosevelt Lake, a reservoir on the Columbia River. Besides serving as North America’s largest hydroelectric facility, the dam has helped irrigate more than 600,000 acres (roughly 2,400 square kilometers) of farmland. At the same time, however, the dam has also blocked migration and impeded spawning of native fish.

The Enhanced Thematic Mapper on NASA’s Landsat 7 satellite captured this image of the Grand Coulee Dam and Franklin Delano Roosevelt Lake on July 23, 1999. In this summertime shot, the land appears in shades of beige, brown, and green. In contrast to the rugged, irregular contours of local peaks, cultivated land appears as a network of rectangles, some deep green, others beige or tan. Bright green dots reveal fields watered with center-pivot irrigation systems. The greatest concentration of agricultural fields occurs south of the dam. North of the reservoir, vegetated hills predominate. Flatter terrain not under cultivation appears gray-beige, likely resulting from sparse vegetation, especially in the northwest.

The Grand Coulee is a large canyon that was gouged into the Columbia Plateau during periodic outburst floods from massive glacial Lake Missoula, which was located upriver in present-day Montana during the Pleistocene. When these apocalyptic floods reached ice dams on the Columbia—near where today’s dam is located—the spectacular rush of water veered southward, carving the Grand Coulee.

When the glacier blocking the Columbia River retreated and the river resumed its modern course, Grand Coulee was left high and dry. Engineers saw it as an ideal location for storing water. They capped the ends, and today, water is pumped into the Grand Coulee from Franklin Delano Roosevelt Lake, creating Banks Lake.

This natural-color image shows Grand Coulee Dam on the Columbia River in Washington, as well as the large area of cropland irrigated by the reservoir upstream.