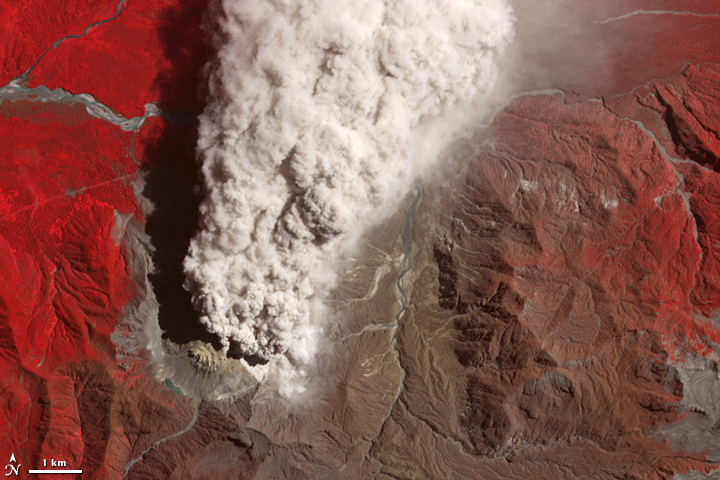 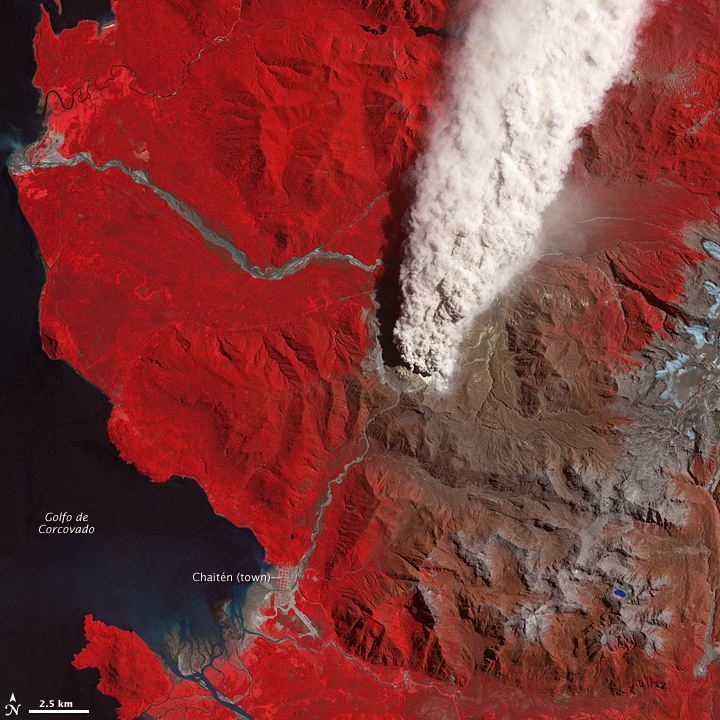 Chile’s Chaitén Volcano had been dormant for more than 9,000 years when it erupted in May 2008. In the months that followed, the volcano remained active, releasing plumes of steam and volcanic ash, coating local vegetation, clogging waterways, and inundating the nearby town of the same name. On January 19, 2009, an explosive dome collapse occurred at the volcano, according to a bulletin from the Volcanism Blog. A thick plume of ash and steam blew from the volcano’s summit approximately 70 kilometers (38 nautical miles) to the north-northeast, according to the U.S. Air Force Weather Agency.

On January 19, 2009, the Advanced Spaceborne Thermal Emission and Reflection Radiometer (ASTER) on NASA’s Terra satellite captured an image of Chaitén Volcano. Two versions of the image appear here: a close-up view of the caldera (top) and a view of the surrounding area (bottom). These false-color images include visible and infrared light. Vegetation is red, bare (possibly ash-covered) ground is brown, and water is deep blue. The plume from the volcano appears off-white, and it is thick enough to completely hide the land surface below.

South and southeast of the volcano, the land surface varies in color from gray to brown, with only isolated patches of red. Close to the volcano, the darker brown colors probably indicate areas coated with volcanic ash or places where the vegetation was killed by earlier ash falls. Farther to the east and south, however, the light gray-brown color probably indicates naturally bare, alpine areas. Glaciers (light blue patches) are scattered among the valleys at the right side of the wide-area image. The meandering waterway between the volcanic summit and the coastal town of Chaitén is Río Blanco, and this river carried numerous lahars—volcanic mudflows—into the town after the May 2008 eruption. Despite repeated inundations, the town’s grid-like layout remains visible.

In January 2009, an explosive dome collapse occurred at Chaitén Volcano, and ash and steam eruptions were visible from space.