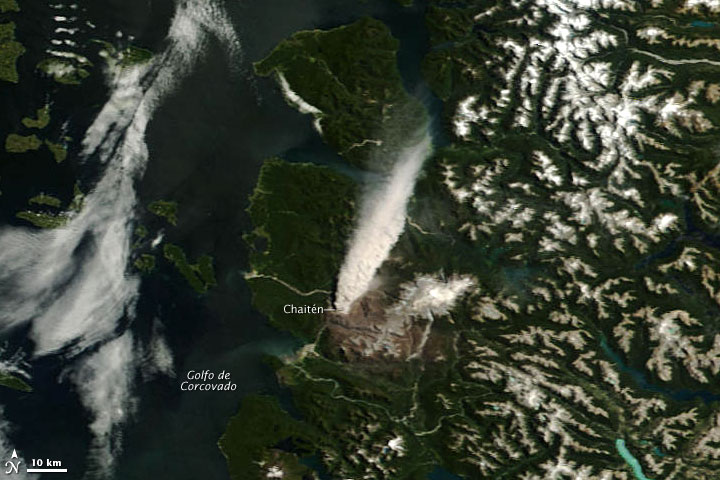 In early 2009, Chaitén Volcano continued its months-long period of unrest. On January 19, 2009, the volcano experienced an explosive dome collapse, according to the Volcanism Blog. A bulletin from the U.S. Air Force Weather Agency reported ash plumes extending 70 kilometers (38 nautical miles) north-northeast of the summit on the same day.

The volcano’s ash plume is visible in this image acquired by the Moderate Resolution Imaging Spectroradiometer (MODIS) on NASA’s Terra satellite on January 19. In this image, an opaque white plume blows away from the volcano, dissipating slightly along its western margin as it heads toward the northeast. Southwest of the volcano is the town of the same name, and a faint plume of blue-green sediment appears along the town’s shoreline. This sediment likely contains some volcanic ash that continues to be carried past the coastal town by local waterways.

Chaitén is a caldera volcano formed by the removal of magma under the volcano’s summit. Prior to a series of violent eruptions starting in May 2008, the volcano had been dormant for more than 9,000 years.