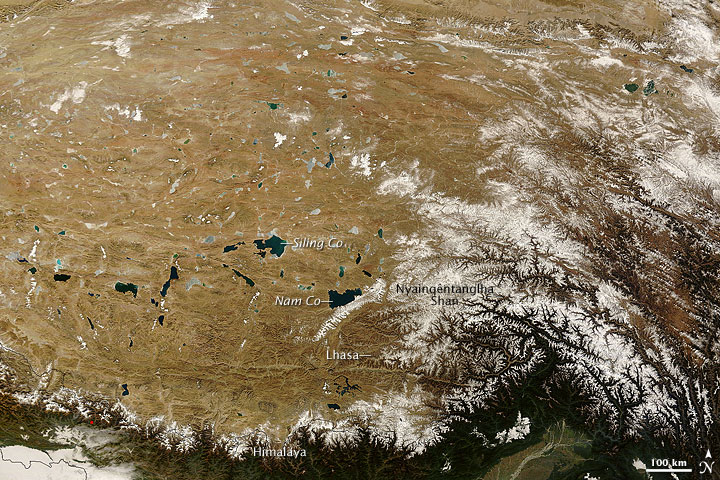 Cloudless skies allowed a clear view of Tibet in mid-December 2008. The Moderate Resolution Imaging Spectroradiometer (MODIS) flying onboard NASA’s Terra satellite captured this true-color, photo-like image on December 18, 2008. Snow caps some mountain peaks, and ice partially covers some lakes in this high-altitude region, which is nicknamed the “Roof of the World.”

The Tibetan Plateau is home to more than 1,500 large and small lakes that cover 24,183 square kilometers (9,337 square miles). The area is also the source of many of Asia’s major rivers, including the Brahmaputra, Indus, Ganges, Salween (Nu Jiang), Mekong (Lancang Jiang), Yangtze (Chang Jiang), and Yellow (Huang He) Rivers. In this image, sapphire lakes dot the plateau’s rugged surface. Many of the larger lakes, including Siling Co (Siling Tso) and Nam Co (Namptso) are largely ice-free, evidenced by their uniform navy color. Some of the smaller lakes, however, appear in paler shades of blue due to ice cover.

The Himalaya rim the southern edge of the Tibetan Plateau, and the Nyainqêntanglha Shan arc toward Nam Co from the southeast. The mountain ranges sport snow-capped peaks intermingling with dark, vegetated slopes.