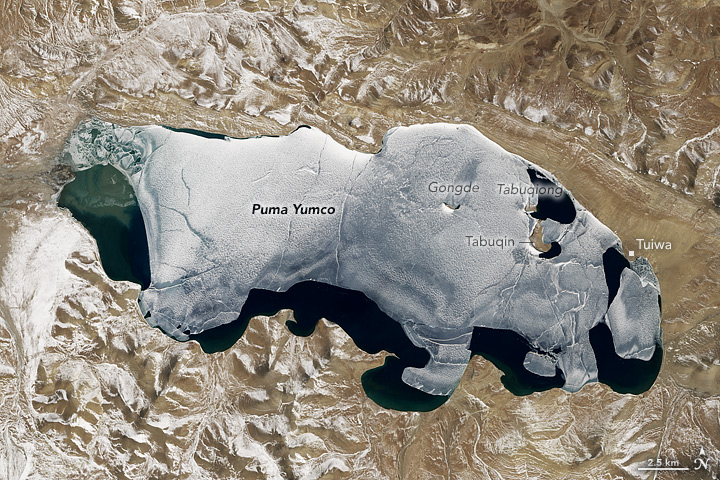 Several hundred lakes dot the expansive Tibetan Plateau. With the average plateau elevation exceeding 4,500 meters (14,800 feet) above sea level, its lakes are among the highest in the world.

Puma Yumco in Lhozhag County is one of the larger lakes in southern Tibet. A small village along the eastern edge of the lake—Tuiwa—is reportedly one of the highest administered settlements in the world, sitting at an elevation of 5,070 meters (16,630 feet). Tuiwa’s economy centers on raising livestock (sheep and yaks), tourism, and textiles. Though there are fish in the lake, they are considered sacred and are not eaten by most Tibetans.

Every winter, villagers herd thousands of sheep across the lake’s frozen surface to two small islands, where the soil is more fertile and the forage is better in the winter. You can click here to see photos of the sheep migration taken on February 9, 2017. The Operational Land Imager (OLI) on Landsat 8 captured this image of the ice-covered lake on March 13, 2017.

While the rhythms of life have remained largely unchanged in Tuiwa for many decades, researchers have used satellites to track subtle changes at Puma Yumco and other lakes throughout the plateau. One team has found that the number of lakes on the Tibetan Plateau has increased by 48 percent, and the surface area of the water has increased by 27 percent between the 1990s and 2015. For Puma Yumco, the size of the lake dropped a bit between the 1970s and 1990s, but has risen since then, primarily because of an increase in precipitation.