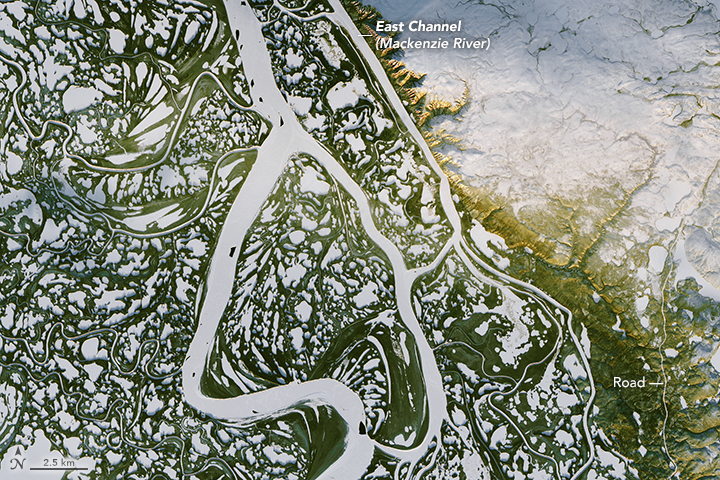 If your vehicle weighs less than 22,000 pounds, you can drive the frozen river out to Reindeer Station. Bitterly cold and 194 kilometers (120 miles) long, the ice road runs between the remote outposts of Inuvik and Tuktoyaktuk.

The top image, acquired on November 7, 2016, by the Operational Land Imager (OLI) on Landsat 8, shows a portion of the Mackenzie River Delta—including this frozen highway along the river’s East Channel. White, snow-and-ice covered waterways stand out amid green, pine-covered land. The low angle of the sunlight bathes the higher elevations in golden light.

The Mackenzie River system is Canada’s largest watershed, and the tenth largest water basin in the world. The river runs 4,200 kilometers (2,600 miles) from the Columbia Icefield in the Canadian Rockies to the Arctic Ocean.

Every so often, flooding from the Mackenzie River replenishes the surrounding lakes. A 1950s-era map of the area indicates that its landforms have not changed much since then. However, parts of the watershed sit atop permafrost, which makes the area vulnerable to climate change.

The pond- and lake-covered lands around the river are home to caribou, waterfowl, and a number of fish species. Several thousand reindeer travel through this area each year on the way to their calving grounds.

A wider view (below) shows the town of Inuvik, home to more than 3,000 people. An all-weather road (as opposed to the frozen river) should connect the towns once it is completed in late 2017. 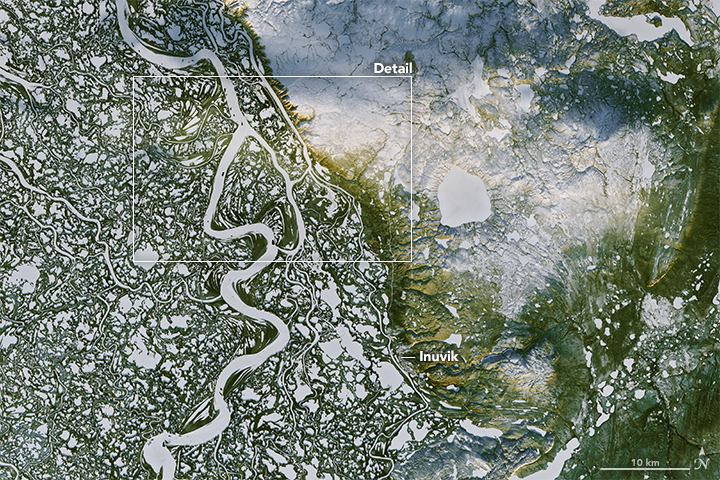 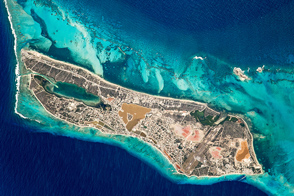