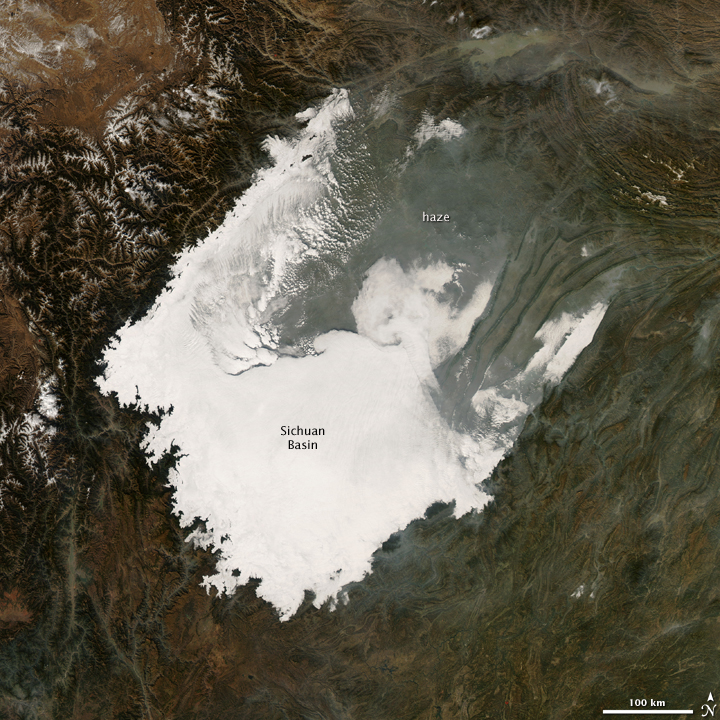 Low clouds hug the ground, seeping into the valleys between the peaks surrounding central China’s Sichuan Basin in this photo-like image captured by the Moderate Resolution Imaging Spectroradiometer (MODIS) on NASA’s Aqua satellite on December 9, 2008. The clouds highlight the varied topography of the region. The low-lying basin is draped in a thick layer of white that seems to creep out along river valleys in thin gray filaments. The surrounding mountain peaks, meanwhile, are unusually cloud-free. The highest peaks west of the Sichuan Basin are topped with snow.

Apart from being shaped by the land, the low clouds are also textured by the land. Ripples run across the tops of the clouds, likely caused by the rise and fall of the air moving over the uneven surface of the land below. The thin gray haze to the north of the cloud bank may be pollution released by burning coal for winter heating.

Both clouds and haze are almost certainly trapped in the Sichuan Basin by a temperature inversion. Normally, air is warmest near the surface of the Earth. The warm air rises, cools, and then sinks, creating the vertical circulation that is a crucial ingredient in weather. But occasionally, a mass of warm air will move over cooler air so that the atmosphere actually warms with altitude. Since the cool air does not have the energy to rise through the warm air, the vertical circulation stops and the air is trapped at the surface. Any pollutant that enters the air is also trapped in place, and over time, haze builds in the atmosphere. Because temperature inversions most often form in mountain valleys, where the land helps contain the cold air, populous valleys like Los Angeles, Mexico City, or Salt Lake City are prone to haze, particularly during the winter. Daily images of the Sichuan Basin showed that this inversion persisted for several days.

A temperature inversion most likely created this stunning view of low clouds hugging the contours of the Sichuan Basin in Central China in early December 2008.