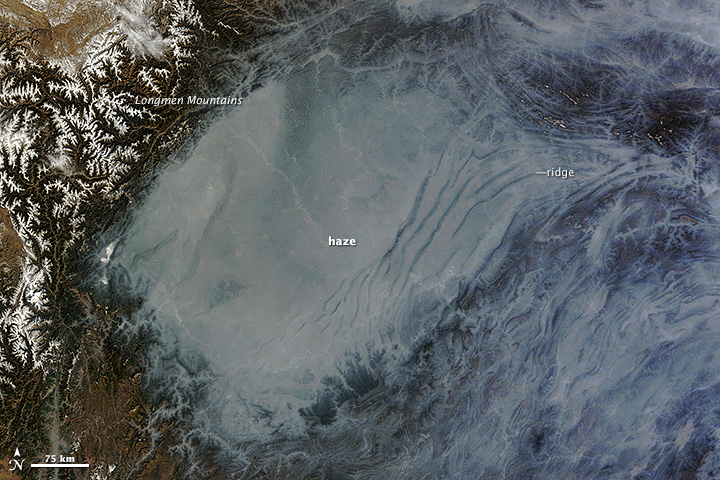 A layer of haze filled China’s Sichuan Basin on January 23, 2014, when the Moderate Resolution Imaging Spectroradiometer (MODIS) on NASA’s Terra satellite acquired this natural-color image. The haze obscured many features usually visible in satellite images of the area, including Sichuan province’s largest city, Chengdu. In the eastern part of the basin the tops of a series of ridges were visible above the layer of pollution. Skies were clear in the highlands west of the basin, while tendrils of pollution snaked into valleys northeast and southeast of it.

On the day this image was acquired, measurements from ground-based sensors at the U.S. Consulate in Chengdu reported PM2.5 measurements of 267 micrograms per cubic meter of air. Fine, airborne particulate matter (PM) that is smaller than 2.5 microns (about one thirtieth the width of a human hair) is considered dangerous because it is small enough to enter the passages of the human lungs. Most PM2.5 aerosol particles come from the burning of fossil fuels and biomass (wood fires and agricultural burning). The World Health Organization considers PM2.5 to be safe when it is below 25.

Haze in this region tends to worsen in the winter, when cold, heavy air traps pollutants near the surface. In this case, the haze was likely trapped in the Sichuan Basin by a temperature inversion. Normally, air is warmest near the surface of the Earth. Occasionally, a mass of warm air will move over cooler air so that the atmosphere actually warms with altitude. Since the cool air does not have the energy to rise through the warm air, vertical circulation slows and air becomes trapped near the surface.

Any pollutant that enters the air gets trapped as well, and haze builds up over time. Temperature inversions often form in basins and valleys because surrounding higher-elevation land helps contain cold air. Daily images of the Sichuan Basin show that that the pollution has persisted for several days.

A temperature inversion most likely created this stunning view of low clouds hugging the contours of the Sichuan Basin in Central China in early December 2008.