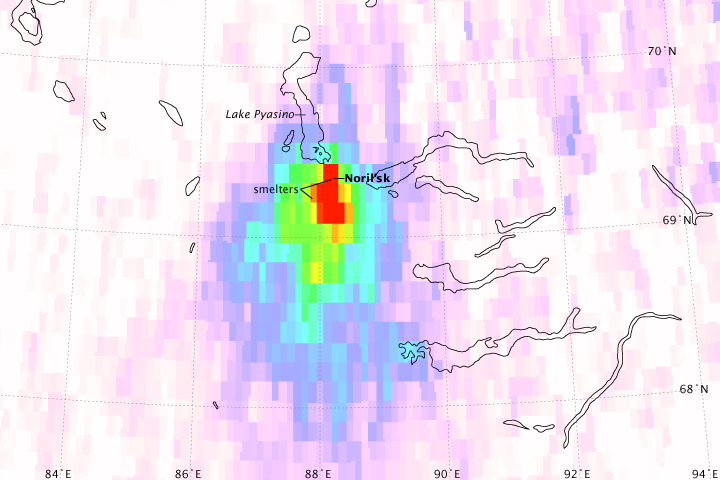 Stainless steel producers rely on nickel to give their products a subtle sheen. Automobile manufacturers rely on palladium to make catalytic converters. Significant amounts of these metals, along with copper, come from one place: Siberia’s Noril’sk smelting facility. The mining facility supports a population of roughly 200,000 people, yet it has also created some of the world’s worst air pollution. Miners must extract the metals from sulfide ore, and the process produces 1.9 million tones of sulfur dioxide each year—more than the entire sulfur dioxide output of France.

Large amounts of sulfur dioxide cause eye irritation, respiratory damage, and acid rain. Around the Noril’sk mining facility, expanses of dead forest testify to the acid rain’s impact. Starting in 1968, tree death increased steadily each year. By 2007, at least 1.2 million acres (4,850 square kilometers) of trees had died. A 2003 study found that the trees with the highest concentration of sulfur in their needles occurred in the most heavily damaged parts of the forest—closest to the smelting facility.

Sulfur dioxide has not been the mining facility’s only environmental consequence. For five decades, the facility produced a steady soot of fine metallic particles. As temperatures warmed and permafrost thawed each spring, the resulting runoff caused soot to collect in ponds and streams, sometimes accumulating to depths of 1.5 meters (5 feet). This accumulation eventually spawned a secondary industry to clean up the metallic sludge and return it to the mining facility for fresh processing. Meanwhile, pollutants from the facility lowered the freezing point of groundwater. Lying some 300 kilometers (150 miles) north of the Arctic Circle, many of Noril’sk’s buildings were built on ice, and the ice underlying some buildings began to thaw. No longer on stable foundations, many buildings had to be abandoned.