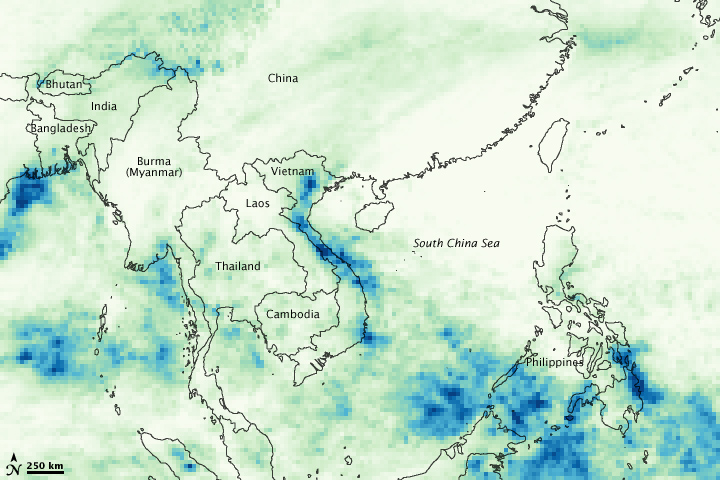 This image shows the torrential rain that triggered severe flooding across northern and central Vietnam in late October and early November 2008. Made with data from the Tropical Rainfall Measuring Mission (TRMM) satellite between October 25 and November 2, the image depicts heavy rain in dark blue. The rainfall totals shown here correspond with ground-based rainfall measurements, where most areas received between 100 and 300 millimeters of rain, according to the International Federation of Red Cross and Red Crescent Societies (IFRC). Local totals, below the resolution of the satellite, were as high as 700 millimeters.

The rain caused floods throughout northern and central Vietnam, particularly in the country’s capital, Hanoi, where flood waters buried neighborhoods in as much as 2.5 meters (8.3 feet) of water, said the AFP news service. As of November 4, up to 85 people had been reported dead, reported the Red Cross, with more than 20,000 families affected by flooding. The floods were not isolated to Hanoi: about 250,000 hectares (600,000 acres) of crops and 170 kilometers (105 miles) of roads had been flooded throughout the country, said AFP.

Torrential rains brought the worst floods in decades to northern and central Vietnam in early November 2008.