Floods on the Mexican Gulf Coast 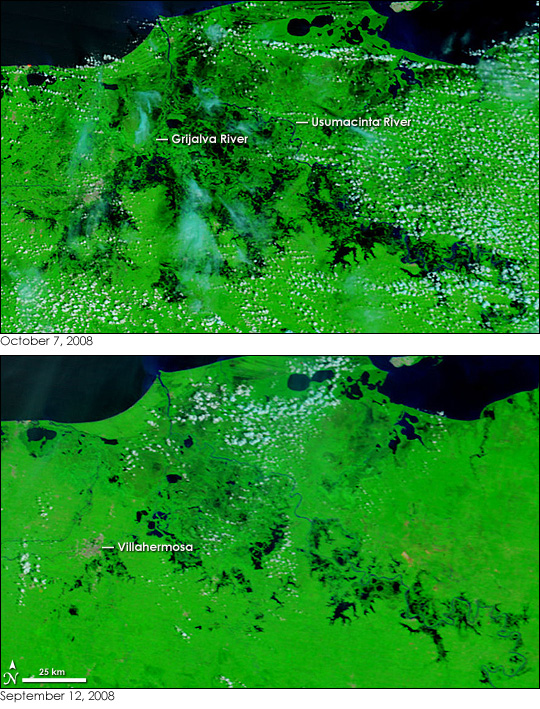 Rivers along Mexico’s Gulf coast burst their banks after two weeks of heavy rain in late September and early October 2008. The flooding forced 7,500 people from their homes and shut down oil wells in the state of Veracruz, said the Associated Press. The Moderate Resolution Imaging Spectroradiometer (MODIS) on NASA’s Terra satellite captured this image of floods in the neighboring state of Tabasco on October 7, 2008. The lower image, from September 12, shows the region under normal conditions.

The images include both visible and infrared light to enhance the presence of water on the ground. Water, black in this type of image, is prevalent in both images. Wetlands surround the rivers—the Usumacinta and Grijalva—that flow together to empty into the Gulf of Mexico in the north. The pools of black that dotted the wetlands on September 12 dominate on October 7, showing the extent of flooding along the overflowing rivers. The floods seem to be encroaching on the city of Villahermosa, a gray region in the image. Plant-covered land around the rivers is bright green, and clouds are light blue and white.